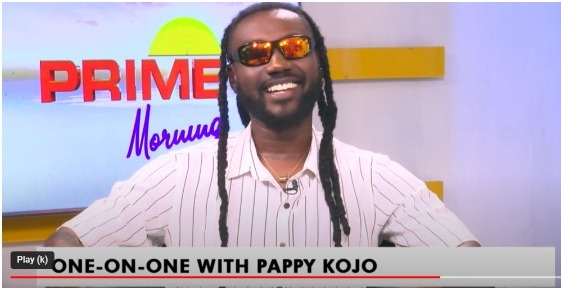 Rapper and singer Jason Gaisie, known in showbiz as Pappy Kojo, says he is not experiencing the current economic hardship in the country.

The majority of Ghanaians, including some celebrities and politicians, have been lamenting the negative impact the current economic difficulties have created.

Some of these changes include increase in the prices of goods and services, among others.

But according to Pappy Kojo on Prime Morning Friday, the cost of living is still normal and everything is alright.

“I don’t feel it. My A/C is still on 24/7, my lights are still on, and my water still comes. I have two poly tanks, so I really don’t see it like that,” the “Realer No” hitmaker stated.

Asked what he will do if the hardship hits him, he said “I’ll go to the airport and then fly and go to Italy.”

Speaking about spending Christmas amid the economic crisis, the rapper said he is set to celebrate the season in the Western Region, Takoradi, as life is ok for him.

Meanwhile, he has released a new song called “Frass” with Reggae/Dancehall and Afrobeats artiste, Larruso.

DISCLAIMER: The Views, Comments, Opinions, Contributions and Statements made by Readers and Contributors on this platform do not necessarily represent the views or policy of Multimedia Group Limited.
Tags:
I don’t feel any economic hardship
Pappy Kojo