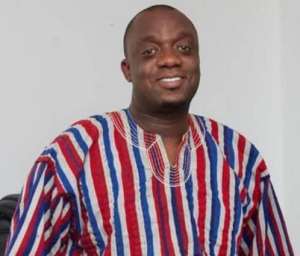 The newly-elected General Secretary of the New Patriotic Party (NPP), Justin Frimpong Kodua has revealed that his new role really dawned on him after a visit to the Vice President, Dr Mahamudu Bawumia.

Usually, after an election, it takes a while for the winners to come to terms with their victory and the new responsibility that it comes.

This is often due to the nature of the elections and the challenges the candidates may have encountered.

In the case of Justin Frimpong Kodua, popularly known as JFK, he says he was re-awakened to his role as the chief scribe of the ruling party, following a courtesy call to the Vice President on Tuesday.

He narrated this in an interview with Evans Mensah on PM Express on Wednesday, July 20.

“It was yesterday [Tuesday] that I actually remembered or got to understand that I was the General Secretary of the New Patriotic Party. It was in the day around 5pm.

“The newly elected national executives went to pay a courtesy call on His Excellency the President, so we had that discussion and everything went on successfully. So afterwards, we decided to go and see the Vice President at his office”, Mr Kodua said.

He continued: “So when he walked [in], we were already seated. And I remember the 3rd Vice Chairperson was sitting closer to the gate, then the 2nd Vice, then the 1st Vice, then myself before the Chairman.

So after greeting them, he mentioned, ‘General’! He said ‘General’. And I didn’t even respond. It was the 1st Vice Chairperson who drew my attention … And I said ‘wow’, then I’m really facing reality. I’m indeed the General Secretary of the New Patriotic Party”, Justin Kodua recounted.

Responding to how he feels after being awakened to his latest assignment, Mr Kodua said his new job does not overwhelm him at all.

According to him, he is a very optimistic individual fellow, who loves to take on new challenges; thus he is poised for the task at hand.

“I’m one person that loves challenge and I’m a very adventurous person and anytime [an] opportunity presents itself, I don’t look at the negative sides. I don’t look at whether the situation is so overwhelming or I’ll not be able to succeed. I’m not a pessimist”, he explained.

Making reference to when he was first appointed as the boss of the Youth Employment Agency (YEA), he said that was his first time of working in the public sector, hence he had no relevant experience.

However, Mr Kodua said he was able to acquaint himself with the operations of the Agency, and later weathered through the challenges of the Agency’s controversial history.

This he indicated is an evidence of his ability to embrace new challenges and surmount them. Mr Kodua subsequently reiterated his readiness to help the NPP win the 2024 general election.

JFK beat the incumbent John Boadu to become the General Secretary of the NPP at the party’s National Delegates Conference on Sunday July 17, 2022.

In what was widely described as a keenly contested election, JFK defied the odds to beat Mr Boadu by 2,857 votes as compared to Mr Boadu’s 2,524 votes.

The outcome of the polls was seen as a surprise by many. But speaking on PM Express, Mr Kodua said he entered into the elections with hope, and was confident of victory from the outset.

Meanwhile, a section of the populace continue to discuss the outcome of the contest, with concerns about why John Boadu lost.

But according to a report by JoyNews’ Paa Kwesi Schandorf, Mr Boadu lost as a result of his lack of concern for the party’s grassroots amongst other pertinent issues.