I gave up drinking after I cheated on my partner - MyJoyOnline.com

I gave up drinking after I cheated on my partner

I woke up confused and in someone else’s bed, with no memory of the night before. As I started to come round, snatches of the evening began filtering back to me. I remembered flirting with a guy. Then, I had a memory of getting a taxi back to his. Suddenly, it dawned on me – I’d cheated on my boyfriend.

I was so frustrated with myself – I’d blacked out again. When I talk about “blacking out”, people tend to assume I fell unconscious after too much booze. What it actually means is that, for chunks of the previous night, I was alert and active, dancing away, but the next morning I couldn’t remember anything.

That morning, I was completely mortified – this just wasn’t me. I’d never cheated on someone before. I decided I had to tell my boyfriend. I knew the shame would eat me up otherwise and I wouldn’t have been able to hide it. We were long distance and I didn’t want to tell him over the phone, so I got straight on a coach to see him.

It was a long ride from London to Liverpool, going over what I was going to say. I felt sick with anxiety and fear… and the hangover. To make matters worse, I hadn’t used contraception. Could I be pregnant? Might I have caught an STI? My thoughts were building up and I was a complete wreck by the time I arrived.

It had been three years since I first met Alex*, aged 16. I was at a gig when I noticed how hot the band’s bass player was. After they performed, the band came off stage and my friend introduced me to them.

We got talking and hit it off immediately. Alex was a really kind, sweet guy, so talented and caring. Soon, he became my first love, and my world. I’d follow him to every single gig, no matter how tiny the venue. I thought we were going to be together forever. But that’s not what happened.

Like many teenagers in the UK, I was drinking well before the age of 18, at house parties with older friends or in pubs that were lenient about ID. But once I was of age, it became more frequent. Then, when I got a job and moved to London, work socials meant that my drinking escalated even further. After a few months of living there, I went to a party and I got really, really drunk. Alcohol affects us in different ways but, for me, the second that I started drinking, I became flirtatious and provocative. This party was no different. 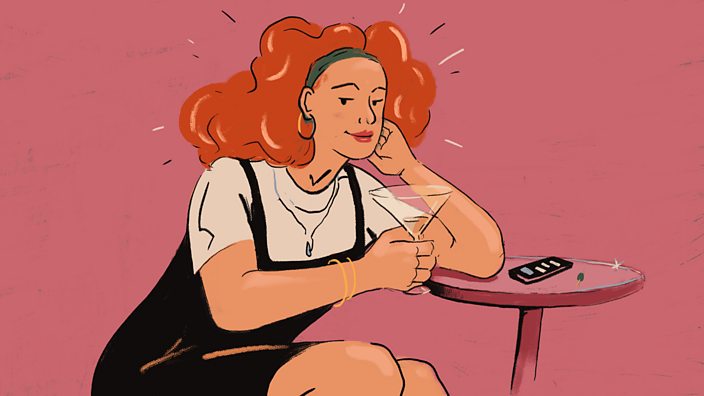 Vikki found she became very flirty when she’d been drinking

“I have to tell you something,” I said to my boyfriend, as soon as I arrived in Liverpool. It all came tumbling out, followed by tears and angry words as he processed what I’d said.

I honestly couldn’t give him an answer.

Eventually, we split up. Ultimately, the main reason he ended it was that he believed that the alcohol was just an excuse for what happened, and he thought there was a deep underlying problem in our relationship. I tried to tell him that wasn’t true, that I would never have made that decision while sober, that I still loved him, but he wouldn’t believe me.

I was so frustrated that I’ve since looked at scientific research into decision-making while drunk. What I found out really surprised me and I wish I could have shared it with him at the time.

A lot of people believe that drinking isn’t an excuse for out-of-character behaviour. They say the truth comes out when you’re drunk, but research actually shows that isn’t true. For me, drinking led me to do things I had absolutely zero desire to do when I was sober. And it’s all down to the way alcohol affects the brain and how we make choices.

“The prefrontal cortex is a part of the brain that helps us to make decisions, it helps us to weigh up the risks and benefits of doing something. It is normally what stops you doing things that are risky or harmful,” says John J. Woodward, a professor in the department of neurosciences at the Medical University of South Carolina, where he’s carried out multiple experiments into how alcohol affects this crucial part of the brain.

“My studies have shown that alcohol can actually affect the ability of neurons in that part of the brain to function properly. The prefrontal cortex is essentially turned off in the presence of alcohol and people are unable to make optimal decisions. You can’t tell the difference between the right decision and the wrong decision.”

But what about the fact that I’d forgotten a lot about that night and experienced “black out”? It turns out this is more common than I’d realised. In a survey of American students, 66.4% reported “blackout drinking”, meaning they lost memory of what happened to them. This is all down to how alcohol affects the part of the brain that deals with memory.

“The hippocampus is the part of the brain that records memories of your life. Alcohol essentially flips the switch and turns the hippocampus off. It prevents the hippocampus from creating memories, so the memories just simply don’t exist,” says Dr Aaron White, senior scientific advisor to the director of the National Institute on Alcohol Abuse and Alcoholism in the USA. “As far as your brain is concerned, the events never occurred.” 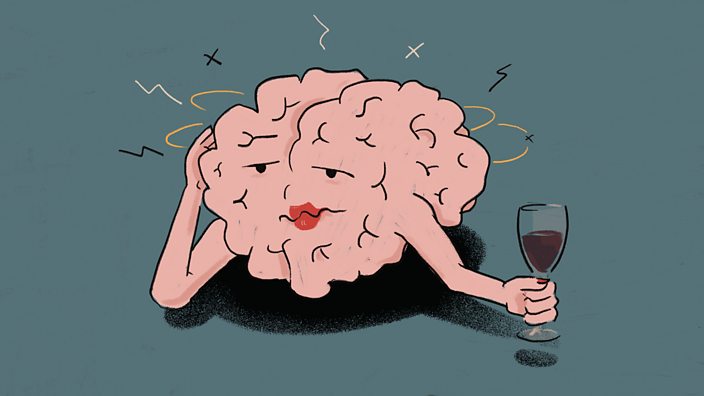 Dr White adds that there is a lot of variation in how much alcohol it takes for different people to experience a blackout. He explains: “It seems to be based on the individual’s brain chemistry. It also matters how fast the person drank. But, in general, a blood alcohol level of 0.15% is enough to reach blackout.”

That’s around five medium glasses of red wine for a woman, seven for a man. But Dr White says some people can blackout after just a few drinks.

“Women seem to be at an increased risk of experiencing blackouts, even if they drink the same amount for their body weight,” he says. “That’s because women’s bodies store more fat. Alcohol doesn’t diffuse well into fat, so more stays in the blood.”

The break-up was really hard. I started drinking more as a way to self-medicate. After three years of single life, which for me meant lots more drinking and partying, I met someone new and it was going great.

Mark* and I fell in love and moved in together but, as my drinking continued, I started flirting with other men. When I was drunk, I would become a much more outgoing, sexual person. I found myself touching men’s arms and being really jokey with them.

There was one person this happened with a lot, one of my male friends. We used to send each other flirty messages. One time, we were arranging to meet up via text, but I was really drunk.

It wasn’t until I was forced out of my home that I realised how bad things had become. I went to stay with my brother, and I was desperate not to repeat the same mistake. It felt like alcohol had caused my life to spiral out of control. I’m an introvert but I’d become quite loud and obnoxious when I was drinking. I realised I’m neither of those things, alcohol was turning me into a monster.

I took a gamble and thought “maybe I can stop drinking for a hundred days”. I haven’t touched alcohol since. I’ve been sober for 18 months.

It’s been tough but I’ve found a great network of people. I read Catherine Gray’s book The Unexpected Joy of Being Sober and followed her suggestion to attempt a 100-day sober stint. Those first few months were the biggest challenge I’ve ever taken on and quite emotional at times. The “simple” act of not drinking alcohol became the most important thing in my life.

I’d become so accustomed to using alcohol as a crutch for every social occasion or stressful situation. Booze was my go-to remedy for all of life’s problems. Foregoing alcohol in social situations was tough, especially as all my friends still drank. My first sober wedding was hard. But, once I’d reached that 100-day goal, I knew there was no going back to a life of blacking out. 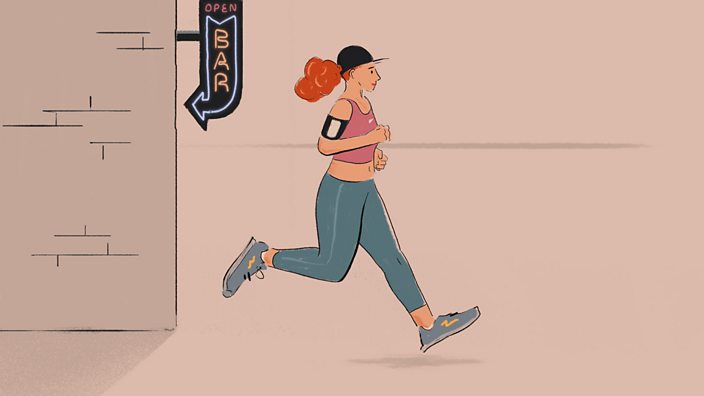 Vikki has taken up running since being sober

I started running more and recently completed my first marathon. I would never have got out of bed for a weekend run while I was drinking.

Now, I’ve become accustomed to partying, dancing and hanging out in the pub without booze. I’ve wised up to the potential triggers and take better care of myself to avoid them. If I’m stressed or upset, I’ll exercise or talk to my friends instead. It feels like an ever-increasing amount of UK pubs and bars are wising up to the fact that fewer people are drinking alcohol so there are more options.

One added benefit was that Mark took me back and, when I quit drinking, our relationship grew and grew. He was pretty much teetotal when we met, so maybe my subconscious chose him as a bid for freedom from booze. Now I’m sober I don’t flirt with men. I see that there are men that are attractive but any desire to flirt with someone else has completely disappeared. I know that, actually, since I’ve stopped drinking, I’m more authentic with myself than I ever was as a drinker.

The gamble paid off. I’m not just sober, I’m also engaged to be married. Mark recently told me that if I’d carried on drinking, there’s no way we’d have lasted.