I will share my deepest secret with only Patapaa – Comedian Jacinta - MyJoyOnline.com

I will share my deepest secret with only Patapaa – Comedian Jacinta 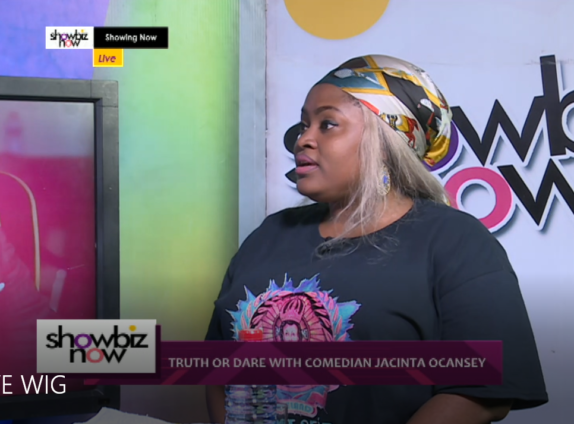 One of Ghana’s finest comedians who seems to be giving her male counterparts a run for their money, Jacinta Ocansey has intimated that she would share her deepest secret with musician Patapaa.

Jacinta appeared on the Celebrity Truth or Dare segment on Showbiz Now where she was asked by the host, KMJ about who she was likely to share her deepest secret with amongst four celebrities; DKB, Kalybos, Shata Wale and Patapaa.

The comedienne without mincing words said she will comfortably share her deepest secret with Patapaa.

Her reason is that when Patapaa goes out there to spill it, no one will believe him because many people don’t take the artiste seriously.

She also mentioned during the show that she would not mind taking Shatta Wale to her parents, shoot Kalybos and have a one night stand with DKB.

Jacinta Asi Ocansey is a Nigerian-Ghanaian stand-up comedian singer and actress. Some of the awards she has won include; Ghana Tertiary Awards 2016 Most Influential Student Comedian, Most Popular Student and Most Entertaining Student.

ShowBiz Now is aired on Joy Prime from Monday to Friday at 11am. The Celebrity Truth or Dare segment of the show airs on Fridays.