If we die, there’d be nobody to vote for you – Joy FM listener to politicians 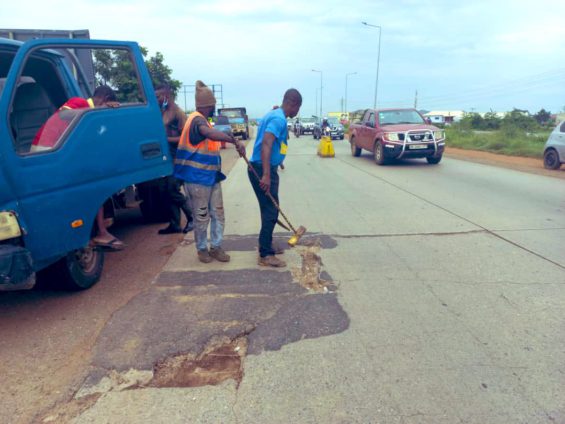 Expressing their frustrations due to personal experiences on the road on Monday, the callers pleaded with the government to heed their plea.

One caller, Sandra pleaded with the government to fix the road if they want Ghanaians to retain them in power.

“So we are begging authorities. I don’t think they want all of us to die on that motorway. If we die, there’d be nobody to vote for them. So they should fix it for us,” she said.

“I fell into the pothole, and the car somersaulted into the ditch. Some few years ago. Because of that after I recovered, I decided I won’t pay toll.  Because I can’t pay money and then come and kill myself on the same road that I’m paying money for.”

Another fervent listener of the show, Richard shared similar sentiments.

With citizens having to pay road tolls for using the highways across the country, Richard said he doesn’t see the point if government is not using those funds to renovate the roads.

“I’ve been plying motorway almost every Friday to DVLA. And there’s one part of the motorway that is getting scary. Most especially, when you’re getting to Abattoir, opposite Toyota Ghana. You’d realize that some part of the road that is developing potholes. It’s really really dangerous.”

This morning on the Super Morning Show; the state of the Accra-Tema motorway.

Another issue raised was the lack of tow trucks on the highways and motorways to tow off vehicles after an accident.

Ama, who witnessed an accident last week, complained about the practice whereby motorists slow down to observe accident scenes, thus reducing traffic flow on that stretch.

She also wondered why motorists are made to pay tolls if the money will not be used to repair the road.

“This thing about the motorway. I don’t even know why we’re even paying the toll. And the motorway is a death trap. Anyone who has never used it before, especially if you try it at night. It is terrible. I use the motorway on a daily basis. Honestly, it’s always a scary thing to do because you can never know what’s going to happen.

“A car can just stop in front of you, stop abruptly because they’ve hit a pothole or something and you’re just behind them. My question is, what do they use the money that we pay for? Because they make so much money if you look at the number of vehicles that ply the motorway on a daily basis.”

Meanwhile, reports from JoyNews journalist, Charles Ayitey show that the potholes on the Accra-Tema Motorway are being fixed.

DISCLAIMER: The Views, Comments, Opinions, Contributions and Statements made by Readers and Contributors on this platform do not necessarily represent the views or policy of Multimedia Group Limited.
Tags:
Accra-Tema motorway
Poor roads