VLK Djokoto: Inside the Supreme Court 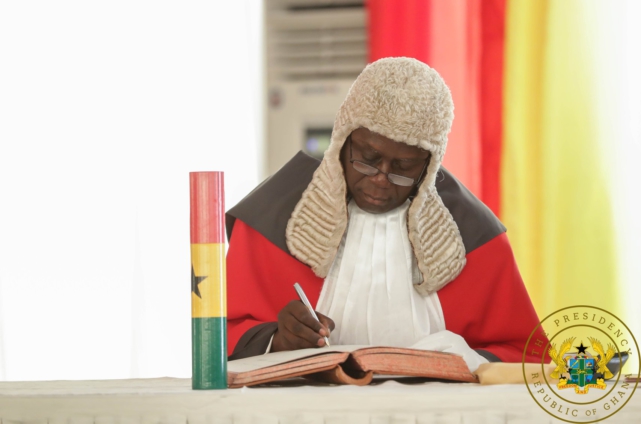 At a quarter past nine on the 25th of June 2020, I vaulted the burgundy stairs of the Supreme Court. Built in British-Accra, its architecture remains a striking remnant of colonialism. I pulled my mask off for a brief moment to inhale some fresh air, twisted the door knob and slid into the court room.

There were about 33 journalists already seated and eager to report the outcome of the National Democratic Congress (NDC) and Electoral Commission case. After a few excusez-moi’s I arrived at the last seat of the second row, to the left, and sat upright next to a dusty three-foot window which overlooked the exit road. The decision of the apex court was highly anticipated.

Eyeballing from one end to another, I took a thorough inventory of all the personalities present. I’d presumed the respective parties involved would be on the verge of distress. But the lawyers and, or, politicians seemed quite calm. Godfred Dame, Deputy Attorney General, was characteristically composed. The charismatic Edudzi Tamakloe, lawyer for the NDC, seemed relaxed too.

We waited over an hour for the judges to grace us with their presence – by that time I had swapped my curiosity for boredom and leaned against the wall, day-dreaming. I was gutted I didn’t have a cup of coffee in hand and a mille-feuille; I felt famished.

The judges finally arrived after an entr’acte. I rested my gaze on Chief Justice Anin-Yeboah as he detailed the unanimous decision of the court. He spoke with such pointed accuracy in his announcement.

It lasted for slightly over 10 minutes. After weeks of persuasive arguments, the court gave concise instructions to the EC to compile a new voter’s register; and to exclude the existing voter’s ID in this process. That was the end. Edudzi Tamakloe briefly exhibited a bewildered look.

In the spirit of the hour, I engaged a few politically savvy lawyers for further deliberations. A warm smile, brief introduction and an occasional wink is usually sufficient enough to lure polite lawyers into an off-the-record conversation. Having opened my notebook, I began fact-checking for accuracy and clarity.

I subsequently excused myself with a bow and exited the court room. By then, the General Secretary of the NDC, Johnson Asiedu Nketia, flanked by Edudzi Tamakloe, was circled by the press and granted an interview.

Swept by the currents of his own emotions and a genuine misinterpretation of the court’s decision, rather than by a mischievous agenda to misinform the general public and mock the apex court, Asiedu Nketia spun an erroneous view on the ruling that puzzled journalists. This was the climax of a controversial day.

Well, whether one’s leanings were NDC or NPP, or whether one’s electoral chances had changed for the better or for the worse, surely at long last it was time to leave the premises, drink to the longevity of our democracy and eat Akple.