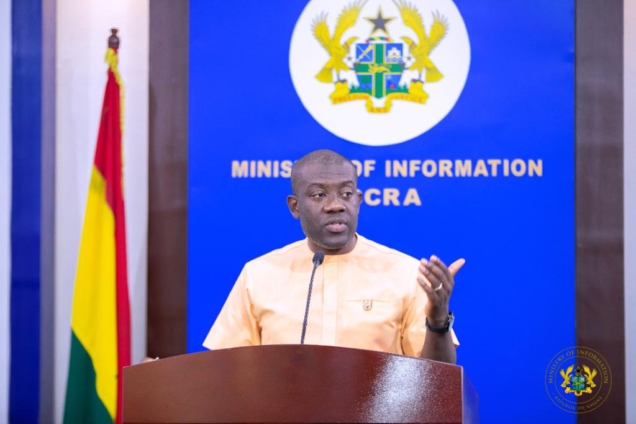 According to him, it has become necessary to step up education on security because of possible recruitment of Ghanaians by extremists for terrorist activities.

Addressing the media in Accra on Sunday, Mr Oppong Nkrumah said the National Security Ministry will be rolling out a series of advocacy campaigns to enlighten the public to be on high alert.

“As recently as the 11th of May, 2022 in Togo, about 10 military persons died as a result of one such terrorist attack. Increasingly, intelligence reports suggest that some Ghanaians have been involved in terrorist attacks in the Sahelian region.

“This signals that there has been the possible recruitment of Ghanaians by some of these terrorist groups in the West African sub-Region.

“The Ministry of National Security has authorised an increased level of awareness among the intelligence community and seeks to deepen engagement with the Ghanaian public, in line with contemporary security practices,” he said.

Meanwhile, the Deputy National Security Coordinator, Edward Asomani, has said the Ministry is on top of the situation and will do whatever it takes to ensure the nation’s security is not compromised.

When he took his turn at the Information Ministry’s Meet-the-Press series on Sunday, he said the country has robust security and intelligence architecture to deal with such matters.

He stated that the security agencies could not function properly without the support and cooperation of Ghanaians.

With this, he charged all Ghanaians to be on the look for suspicious characters and report the same to the security agencies for onward action.

“We are a proud people with robust security and intelligence architecture, but it is not complete when Ghanaians are not on board with us.

“That is why we are here today to seek the support of all Ghanaians. We are not panicking, we are on top of the situation, but we need the help of everybody in our jurisdiction,” he said.