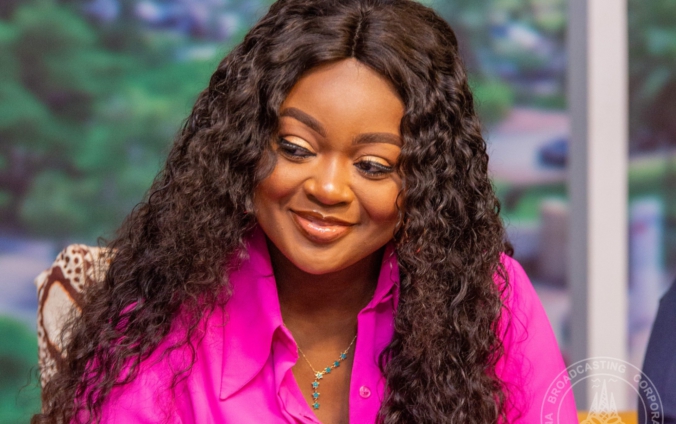 Over the weekend a video of Jackie Appiah’s home went viral.

A friend of the actress who paid her a visit was seen taking a video while being given a tour of the house.

Later a videographer released a detailed video that explored the details of Jackie Appiah’s home located at Trasacco.

Although some fans were impressed with the actress others sought to shame her by claiming she did not buy her home through legitimate means.

However, fans and other celebrities jumped to Jackie Appiah’s defence.

The time Jackie Appiah start Dey act na Dey no born me ,y’all discrediting her hard work ? Not to mention the endorsement deals she do … y’all know how much money dey creatinve art inside ? Y’all dumb ,jealous and playing . #JackieAppiah

When you make it as a man in this country, they attribute it to sakawa or drugs.

You make it as a woman, you’re ashawo.

People who do this are permanently stuck in a snakepit. Wake up from the folly and attempt to make your life better too.

God be with us all.

The system in Ghana is so bad that a lot of people find it hard to believe that a woman such as Jackie Appiah achieved what she has through hard work. Let her enjoy the fruits of her labour. Na she start dey act no be today 👍

Ghanaians don’t seize to amaze me because they havoc soo much bitters and envy ! #JackieAppiah has worked over 2 decades and you think her bank accounts are low in cash to pamper her hardworking self and family that beautiful mansion ?

Let’s not allow people to fool on this app in the name of savagery or hard guy or such nonsense. When Jackie Appiah started making money through acting that Bongo boy was probably in diapers. Today he comes on Twitter to disrespect her in that crude manner. It’s crazy.

If u had a sister called Jackie Appiah, who has been an actress for over 20yrs both local n international n been brand ambassador for many brands in between im sure the narrative would’ve been different n u wouldn’t post a random unknwn mansion n written nonsense..kwasiakwa

It looks like there is no need to acquire wealth as a woman in Ghana cos it’s either associated with the pus*y or the credit is given to some random man. Let’s use Jackie Appiah as a case study. #JackieAppiah

Whether it’s sakawa money she used or your fathers money whom we know he doesn’t have yet !!!! Jackie APPIAH has done it ! It’s a WOMAN from GHANA !!! This lady has upped her game over 2 decades .No pressure!

Jackie Appiah is the actress with the highest number of commercial deals/ads which are all huge deals plus acting really pays her well but you Kofi Babone, u are here spewing rubbish bcos you n your family are poor.

Can’t a woman work this hard for what she deserves? Even if it’s her pussy she used, was it yours?

The Economy management should be given to Jackie Appiah because she prove how she was able to manage her stuff well, but now the government can’t stand the economy with the E-levy add to their borrowing.

So “Jackie Appiah” is trending lately in Ghana due to showcasing her mansion, ain’t she fit enough to own a mansion? Ghanaians 🤦🏻

I just want Jackie Appiah to sue someone keke. Kasa by heart

If you people are saying Jackie Appiah used her “Toto” and rubbishing all her hard works and ambassadorial deals, then you people should go and do some. SMH

Jackie Appiah has to sue this prick to show us things she did to achieve her riches. Celebrities gotta make a scapegoat outta these scamps for such prejudiced nonsense. They are the cause of this increasing chastisement from puny citizens, because they don’t take legal actions. pic.twitter.com/OUlAsoiOdE

instead of Ghanaians should be proud of Jackie Appiah of her Luxurous aquired mansion they are rather given trash comment by the way i will try and pay her visit .

Has Jackie Appiah stolen anyone’s family property why is this country full of 2 many educated idiots saa ? the PPA boss allegedly chop ghana tax payers money who has bothered to talk about that ? Gyimie nu in this yard is real anpa

No be today Jackie Appiah started hustling oo..
Her sweat is paying off. Y’all relax with those odd submissions 😒

Nana Ama McBrown has bagged so many endorsement deals in GH. Jackie Appiah has also done same. You know you’ve been seeing them on billboards since you were a kid but here you are talking smack. Not everyone is loud about their achievements.