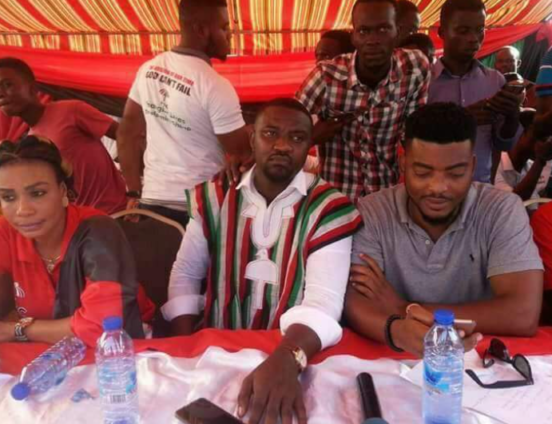 Ghanaians have taken to Twitter in anticipation of the electoral results for Ayawaso West Wuogon Constituency where the NDC Parliamentary candidate, John Dumelo is looking to unseat the incumbent, Lydia Alhassan.

It appears all is not rosy in the camp of the NDC parliamentary candidate.

So Dumelo gave Kwame a laptop and today he met kwame in a NPP shirt .

What John Dumelo no do? FEAR WOMEN😭 pic.twitter.com/iPaWKodMcb

At this stage, John Dumelo realised he was attending his own funeral😭😭😭

Okay so it seems most of the UG students who supported John Dumelo weren’t even residents of Ayawaso West Wuogon.

Before Election After Election pic.twitter.com/62Sv4NGpND

After what has happened to Dumelo nu you still believe politics is about popularity lol ….herh Maa Lydia be hard pass 😂😂😂😂

I doubt John Dumelo himself had some strong belief he’ll take that Ayawaso West seat on first attempt. That zone no be place you fit switch to an NDC zone in just 4 years.

This campaign message from Dumelo was deep . !! pic.twitter.com/2Ox8Atxxqi

The money Dumelo had from acting all he take do politics. As the movie industry cast dierr unless he go act Efie wura for TV3 like that o😭😭

The Ayawaso West Wuogon seat has been uncontested since 2000. The New Patriotic Party (NPP), has held that parliamentary seat since 2000.

Earlier on during the voting process of the 2020 general elections, December 7, 2020, John Dumelo suggested that voting processes should be halted in the constituency he was contesting for lack of indelible ink.

However the Electoral Commision debunked this claim.