Kente cloth is beloved in Ghana. Why did Democrats wear it? 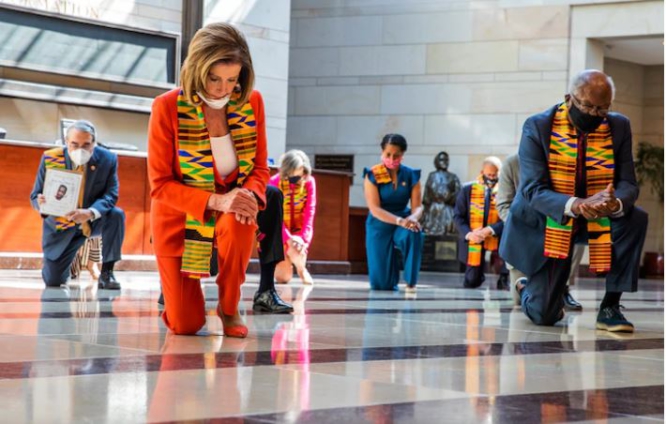 US House Speaker Nancy Pelosi (D-Calif.) and other members of Congress observe a moment of silence at the Capitol's Emancipation Hall on Monday. (Manuel Balce Ceneta/AP)

When House Speaker Nancy Pelosi, Senate Minority Leader Charles E. Schumer and other top Democrats took a knee Monday on Capitol Hill to honor the life of George Floyd, the Internet’s eyes jumped to the colorful fabric draped around their shoulders.

Kente cloth — woven with vibrant strips of silk and cotton — comes from Ghana, where people wear it to show patriotism or celebrate a special occasion. It is associated with royalty, pride and black identity.

Why did the Democrats sport it while unveiling a broad police reform bill?

The Black Caucus handed out the cloths to the lawmakers.

“I know we are in unexpected times and anything is possible but listen man I did not have ‘Pelosi in Kente cloth’ on the bingo card,” wrote editor Hanif Abdurraqib in a widely shared tweet.

“Everyone was texting me these Kente Cloth photos,” wrote Questlove, drummer for the Roots. “I had to come here to make sure the Roots weren’t pranking me.”

Writer Roxane Gay tweeted: “I am not sure what’s funnier, those ridiculous politicians wearing kente cloth or Cory Booker smartly opting out of that absurd performance.”

Across the Atlantic, some in Ghana followed the buzz with a mix of appreciation and skepticism.

“I saw that and I was like, ‘Wow,’ ” said Jermaine Nkrumah, the head of a television network in Ghana’s capital, Accra. “The optics look good, but what happens when the cameras go away?”

He wants to see more action.

“There’s always this elevation of emotion in the United States,” he said. “Then it dies down and everything reverts back to normalcy. We want it to be different this time.”

After video surfaced of a Minneapolis police officer kneeling on the neck of Floyd before his death, protesters marched in Accra. The government held a memorial service for the slain American. Another hashtag emerged: #AfricaForBlackLives.

“The connection with the U.S., with the African American community, is very deep,” Nkrumah said. “It stems from the slave trade 400 years ago. We have a natural feeling to be in this fight.”

The congressional Democrats wore Ghanaian textiles as they urged President Trump to back measures pointed at strengthening accountability in law enforcement and quashing racial profiling.

The proposed Justice in Policing Act of 2020 would outlaw chokeholds and create a national database to track police misconduct.

“We cannot settle for anything less than transformative, structural change,” Pelosi (D-Calif.) said at the bill’s televised debut.

It wasn’t Pelosi’s first time. She put on a stole last year during a visit to Ghana.

Members of the Congressional Black Caucus, meanwhile, wore yellow, green and black pieces to Trump’s first State of the Union address — a move to support the African nations he had described in derogatory terms, Rep. Maxine Waters (D-Calif.) told the Grio at the time. (Bass’s office did not immediately respond for comment.)

The fabric can represent resistance.

Erieka Bennett, who leads the Diaspora African Forum, a cultural networking group in Accra, said she applauded the spirit of the Democrats’ gesture.

“It means a lot to us,” she said. “It’s the beginning of a conversation.”