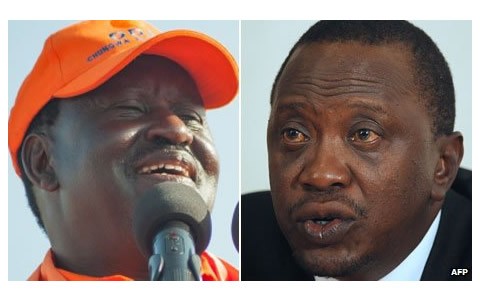 Kenya has held its first presidential debate – between all eight candidates in next month’s tightly contested poll.

Millions of Kenyans watched and listened to the live debate, broadcast on 42 local radio and TV stations, as well as YouTube.

Prime Minister Raila Odinga and his deputy Uhuru Kenyatta, who faces trial for crimes against humanity, are seen as the favourites in the poll.

President Mwai Kibaki is stepping down after two terms in office.

Disputes over the previous election, in 2007, led to ethnic violence in which more than 1,000 people were killed and 300,000 forced from their homes.

During the debate, Mr Odinga said his efforts to establish a local tribunal to try suspects involved in the conflict were thwarted by some of his opponents, who will now be tried at the Hague a month after the 4 March election.

“Me and President Kibaki spent eight hours in Parliament to try and set up a local tribunal…. I know it’s going to cause serious challenges to run the government via skype from the Hague,” he said.

Mr Kenyatta said his trial at the International Criminal Court (ICC) for allegedly fuelling the violence after the 2007 election would not prevent him from performing his duties if he is voted into power next month.

“If people elect me, they have confidence that I can still handle my problems and still discharge my duties as president. The job that I seek is going to be given by the people of Kenya,” he said.

Meanwhile, Kenya’s Foreign Minister Sam Ongeri summoned European Union (EU) ambassadors on Monday, accusing them of interfering in the election by making “inflammatory” remarks that could polarise the nation ahead of the 4 March vote.

The UK and France said recently they would only have limited contact with a president who faced trial at the International Criminal Court (ICC), while US Assistant Secretary of State Johnnie Carson warned Kenyan voters that “choices have consequences”, reports the Reuters news agency.

“You will appreciate that with the impending elections just three weeks away, this is a tense moment of national reflection,” Mr Ongeri said, after meeting the diplomats.

“The question that begs an answer therefore is whether the EU has an interest in the outcome of the elections.”

EU ambassadors issued a joint statement after the meeting denying they were interfering in the elections.

However, the EU statement noted that they “and other like-minded states have a long-standing policy, not limited to Kenya, to have only essential contact with indicted ICC suspects”, the AFP news agency reports.

Six candidates had originally been asked to take part in the debate but one of the two left out, Paul Muite, obtained a last-minute court order blocking it on Monday.

The two excluded contestants were then invited to take part.

The BBC’s David Okwembah in the capital, Nairobi, says the debate was historic as it was the first time so many candidates shared a platform.

However, it is doubtful that the two-hour debate will significantly influence many voters as most Kenyans vote along ethnic lines, he adds.

Mr Odinga says he was cheated of victory in the previous poll by allies of Mr Kibaki.

Their supporters then clashed for two months, often targeting people along ethnic lines, until a deal was brokered which saw them agree to share power.

Both Mr Kibaki and Mr Kenyatta are Kikuyus, while Mr Odinga is from the smaller Luo community.

Mr Kenyatta is due to stand trial at the ICC along with his running mate William Ruto, who is also accused of fuelling the violence which broke out after the 2007 poll.

Both men deny the charges, and say the trial is political.

The other candidates are Musalia Mudavadi, Martha Karua – the only woman – Peter Kenneth, Muhamed Abduba Dida and James ole Kiyiapi.

A second debate will be held on 25 February.

Last week, US President Barack Obama urged the people of Kenya, where his father was born, to avoid violence and intimidation.

He said the polls were a chance for Kenyans to come together to show they were not just members of tribes or ethnic groups, but a proud nation.