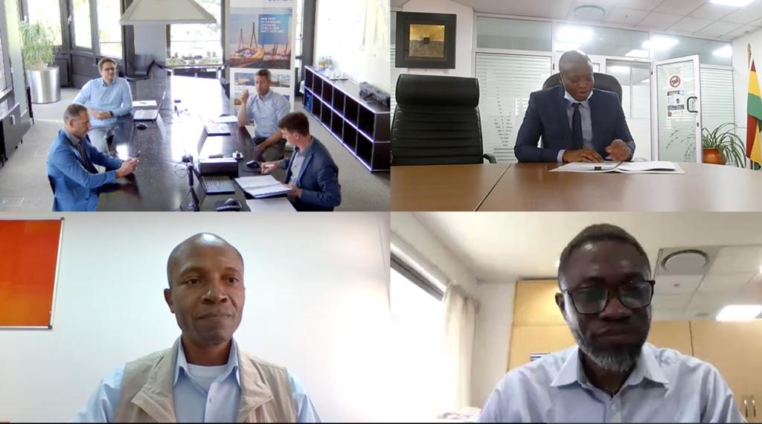 The Ghana Ports and Harbours Authority has commissioned an association of Consultants led by a M/s Sellhorn Ingenieurgesellschaft mbH from Hamburg, Germany.

The other consultants are ProTeln Service GmbH, PSP Architekten, Ingenieure and a Ghanaian team from Yogarib Engineering Services Limited.

The parties, GPHA and Sellhorn Ing. executed the consulting services contract on Wednesday, which marks a major milestone towards the realization of the development of the new Port of Keta.

The signing ceremony was conducted through Microsoft Teams video conferencing at the Headquarters of GPHA between the Authority’s team in Tema and the consultant’s team in various parts of Germany.

At the virtual signing ceremony, the Director General of GPHA, Mr. Michael Luguje acknowledged the limitations imposed on all parties in the face of the Global pandemic.

However, he admonished the team to take all necessary steps to employ their best professional abilities to deliver the terms of the contract since the Port of Keta is an important development agenda for the government and people of Ghana.

In support for the Director General’s remarks, the Director of the Port of Keta, Dr. Alexander Yaw Adusei Jnr. thanked the Director General and management of GPHA for the committed investment in the project and success in appointing a consultant through a professionally well-conducted and transparent process which will aid the commencement of the most critical part of the development of Port of Keta.

The Director of the Port of Keta also expressed the hope that the Volta Region will soon have a modern port and maritime logistics hub for Ghana and a strategic cargo route through the Volta Region and the Eastern Corridor for Ghana’s northern neighbours.

GPHA has also issued the letter of Notice to Commence to the Consultant to begin the services officially on June 23, 2020, in accordance with the conditions of the contract.

The appointed consultant is expected to expedite work to deliver a full feasibility study and master plan, including development and investment strategy for the Port of Keta.

The first feasibility indicators are expected within seven months.

Globally, Port Infrastructure Development is usually a very involving and time consuming activity which doesn’t just spring up but is accompanied by careful decisions backed by empirical facts and detailed port and public infrastructure planning considerations.

Often, it takes years of several considerations before an ultimate construction of physical structures commence.

The James Town Fishing harbour and the fish landing sites had had their project preparations as far back as 2008.

The Takoradi Expansion Project started in 2011 and physical works effectively commenced in 2014.

The procurement of feasibility studies and master planning of Tema Port Expansion project preparations begun earlier than 2012 and yet physical works commenced in December 2016.

Indeed, for an entirely fresh port and port-city infrastructure like what is going to be built at Keta, the commitment and time invested and achieved so far is very impressive with the hope that all other stages or preparatory works will be given such equal devotion to see to the realization of the Port of Keta.

The emergence of COVID-19 already delayed the final signing of the feasibility contract, which should have taken place in the first quarter of the year as there have been impediments like travel restrictions.

Measures have been put in place to address such hurdles going forward.

DISCLAIMER: The Views, Comments, Opinions, Contributions and Statements made by Readers and Contributors on this platform do not necessarily represent the views or policy of Multimedia Group Limited.
Tags:
GPHA
Keta Port