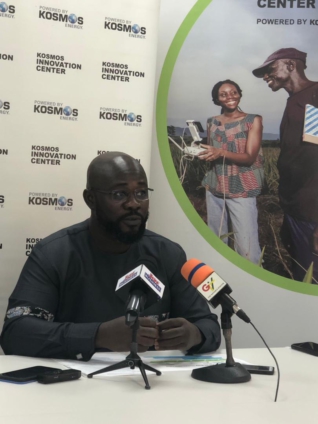 The Kosmos Innovation Centre Programme funded by Kosmos Energy has spent about $6.0m as investment into its agritech challenge to support agribusinesses.

This according to the Director, Benjamin Gyan-Kesse, is for the duration of the programme in the last five years.

He was speaking to Journalists after the company unveiled an advanced version of the challenge known as the ‘Agritech Challenge Pro’.

The Kosmos Innovation Programme is an initiative by Kosmos Energy to support the country’s agriculture sector against food security challenges.

Mr. Gyan-Kesse disclosed that more than 600,000 young people have benefited from the programme through training, mentorship and business incubation.

According to him, since the inception of the programme in 2016, Kosmos has spent about lots of money to transform SMEs in the agribusiness space.

“Many people look at the $100 million seed fund for the entrepreneurs, but beyond that we have spent a little over $6.0 million when you look at mentorship, recruitment process, incubation, through-out the country.”

“The challenge is focused on the agribusiness sector because we feel that is the highest employment generation sector in the country” he noted.

He believes that the next season which is the ‘Agritech Challenge Pro’ is expected to bring more SMEs on board.

The KIC programmes have invested in young entrepreneurs with ideas in supporting the country’s economy through agribusiness and technology.