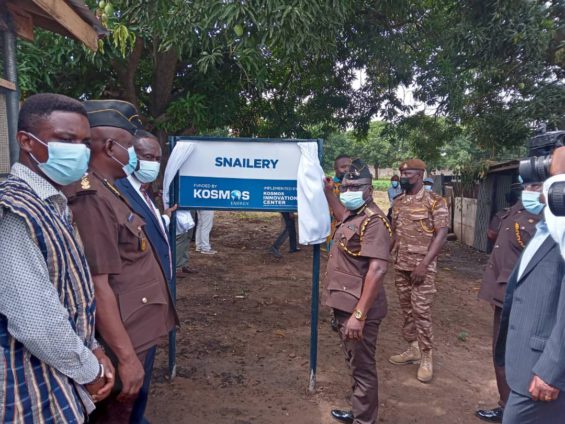 Kosmos Energy’s Innovation Center has commissioned three projects at the James Camp Prison, as part of the final phase of its Hunger Relief Programme.

The second phase of the project targeted at inmates of the prison will lead to long-term food supply, provision of entrepreneurial skills for the inmates and consequently generate income for them.

The project include two ‘snaileries’, a mushroom center and an irrigated vegetable farm to help alleviate hunger amongst the inmates at the James Camp Prison and the Senior Correctional Center, as well as generate some income.

The initial phase of the programme in 2020 saw a donation of $50,000 worth of food supplies to 400 families at the prison and some correctional facilities.

Kosmos Energy hopes the two projects will not only solve hunger, but equip the officials and inmates with skills in agriculture and also generate income from the sale of the foodstuffs.

Addressing the press, Head of Senior Correctional Center, ADP Millicent Owusu applauded Kosmos Energy for such a laudable programme and assured that trained officers will be put in charge of the centers to sustain and maintain them.

Country Director of Kosmos Energy, Joe Mensah, for his part expressed happiness that Kosmos Energy has achieved its goal of undertaking this initiative

“We hope our commitment and support will go a long way to augment your efforts towards overcoming the impact of Covid-19 on your livelihoods. The Kosmos Innovation Center will continue to support you with project monitoring and guidance for the next six months.”