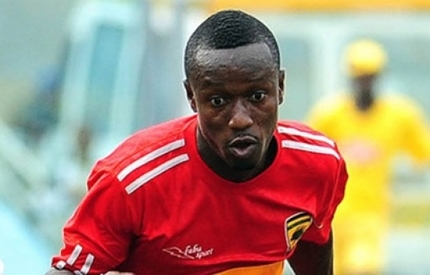 Asante Kotoko midfielder, Michael Akufo has backed Accra Hearts of Oak to eliminate Esperance de Tunis to seal a qualification into the group stage of the CAF Confederation Cup.

The Phobians have a daunting task in Accra coming this Saturday as they have to score 5 times unanswered in other to overturn their 4-0 defeat in Esperance.

With the impregnable Esperance de Tunis looking more comfortable ahead of the second leg tie due to their sound victory in the first leg, Michael Akufo one of the midfielders of Hearts of Oak’s bitterest rival [Kotoko] has pledged his unflinching support by backing the Phobians to eliminate Esperance de Tunis.

“I’m supporting Hearts of Oak to eliminate Esperance and I know that God will help them to achieve that,” he told Oman FM.

“Due to the first leg score line they [Esperance de Tunis] might be complacent in the game and I want Hearts of Oak to take full advantage and punish them because I strongly believe a miracle will happen at the Accra sports stadium on the day.”

The 27-year old added that the rivalry between his club [Asante Kotoko] and Hearts of Oak is a secondary issue because the Phobians are representing the nation.

“It doesn’t matter that I’m a player of Kotoko, it is not about Hearts of Oak and Kotoko rivalry is about the country Ghana because Hearts [of Oak] is representing the nation and when they qualify it will help the course of club football in the country so I’m urging them to go all out and beat Esperance de Tunis to qualify into the group face of the Confederation Cup”.