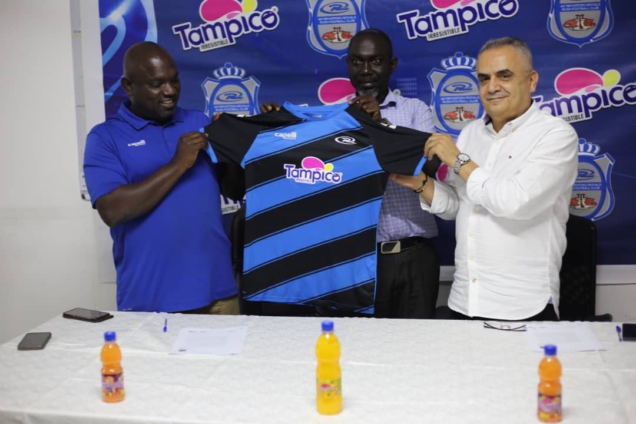 Akyem Kotoku Royals Rush Football Club has signed a Memorandum of Understanding (MoU) with the Acadia Industries Limited, manufacturers of Tampico as its official lead sponsor for the upcoming season and two years after.

The sponsorship package among other things included the supply of top-quality products of the brand to the football club, branding of some belongings of the club, and an undisclosed amount of financial support to supplement their operational cost for the next three seasons.

President of Kotoku Royals, Linford Boadu Asamoah, emphasized that usually sponsorship for local football has been a challenge, even for the Ghana Football Association (GFA), and so the sponsorship partnership with Tampico was held in high esteem, adding that both parties delivered on expectations in the previous season and this new one will not be different.

“Sponsorship is not easy in Ghana even for the premier league, but now we have some few companies coming on board this season to sponsor the league and so at the club level we are very grateful to have Tampico come in to help us to augment our operational cost and we will do everything possible to ensure we give them value for the partnership to continue,” he said.

Touching on the preparedness of the club for the upcoming season, he indicated that the team has for the past month pitched camp in Koforidua, Eastern Region, where rigorous training models are being deployed to ensure the players are fit and ready for the competition.

“During the pre-season period, we played a couple of matches and for the past one and half months, we have been camping in Koforidua. We also signed some new players to augment the old, so we are right on course for this challenge,” he added.

National Sales and Marketing Manager, Acadia Industries, Fady Helou, in his remarks indicated that the relationship between his outfit and the newly promoted football club to the Ghana Premier League existed even when the club was in the division one league and because management is satisfied with the great work done to gain promotion to the topflight league, the package has been enhanced to intensify the partnership.

“Tampico is an internationally acclaimed brand, and we believe in youth development and always want to help talent development. So, we associate our brand with sports to encourage the youth to stay in sports and put their energies to positive use,” he said.

He added further that whilst supporting the guys in the club to go out there and do their best, the association is also to let the people know that Tampico is still the top-quality product that provides the right energy to remain productive all the time.

The signing ceremony took place at the head office of Acadia Industries Limited, in Abelemkpe-Accra, witnessed by representatives from both parties in a short colorful event.

DISCLAIMER: The Views, Comments, Opinions, Contributions and Statements made by Readers and Contributors on this platform do not necessarily represent the views or policy of Multimedia Group Limited.
Tags:
Ghana Premier League
Kotoku Royals