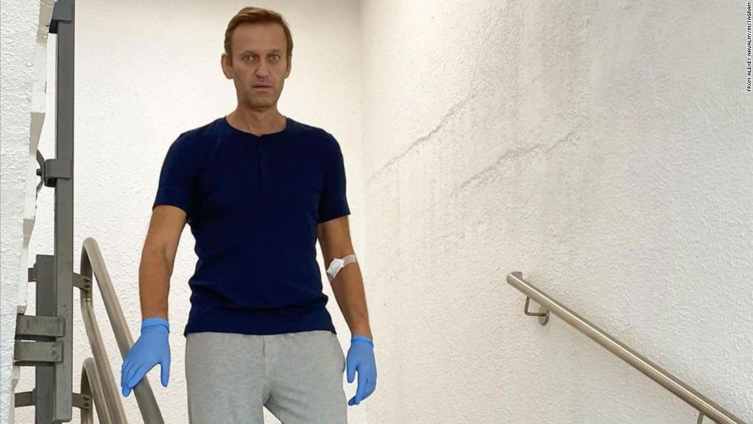 Russian opposition politician Alexey Navalny posted a photo of himself standing on the stairs and said he is still unable to use his phone properly or pour himself a glass of water but there is a ???clear road??? ahead in his recovery process.

Russian opposition politician Alexey Navalny has been discharged from hospital after his near-fatal poisoning and could potentially make a complete recovery, according to the German hospital which has been treating him since last month.

Navalny became gravely ill on a flight from the Siberian city of Tomsk to Moscow on August 20. He was initially hospitalized in the city of Omsk, before being flown to Berlin’s Charité Hospital two days later.

“The patient’s condition has improved sufficiently for him to be discharged from acute inpatient care,” said a statement from Berlin’s Charité Hospital released Wednesday, a day after the Kremlin critic left hospital.

“Alexey Navalny has been receiving treatment at Charité for a total of 32 days, of which 24 days were spent in intensive care,” it said.

“Based on the patient’s progress and current condition, the treating physicians believe that complete recovery is possible. However, it remains too early to gauge the potential long-term effects of his severe poisoning.”

The German government has said Navalny was poisoned with a chemical agent from the Soviet-era Novichok group, a conclusion supported by two other labs in France and Sweden.

The Kremlin has strongly denied any involvement, but multiple questions remain. Novichok was also used in a March 2018 attack on former Russian spy Sergei Skripal in the English city of Salisbury and multiple Russian dissidents have been poisoned in the past.

In an update posted on Instagram on Saturday, Navalny had said he was still unable to use his phone properly or pour himself a glass of water, but was on a “clear road” to recovery.

He posted a picture of himself walking down a staircase, writing that he was regaining his physical and mental capacity.

Two days later, the politician demanded that Russian authorities return the clothes he was wearing on the day he fell ill.

“Before they allowed me to go to Germany, they took all my clothes off and I was sent there completely naked,” he said in a statement.

“Taking into account the fact that Novichok was found on my body, and a contact method of poisoning is very likely, my clothes are very important material evidence.”

Monday’s statement coincided with the expiration date of a preliminary probe into the incident by Russian authorities, which did not result in a criminal investigation.

Navalny’s spokeswoman, Kira Yarmysh, said the Russian government had turned a blind eye to the incident.

Last week, Navalny’s aides said they had taken items from his Tomsk hotel room to Germany, where a lab later found traces of a nerve agent on one of the water bottles he apparently drank from.

Navalny’s colleague who collected the items in Tomsk, chief investigator Georgy Alburov, previously told CNN the water bottle was not necessarily the item used to poison the Kremlin critic, suggesting the substance could have been placed on a different object.

DISCLAIMER: The Views, Comments, Opinions, Contributions and Statements made by Readers and Contributors on this platform do not necessarily represent the views or policy of Multimedia Group Limited.
Tags:
Alexey Navalny
Berlin
Russian government