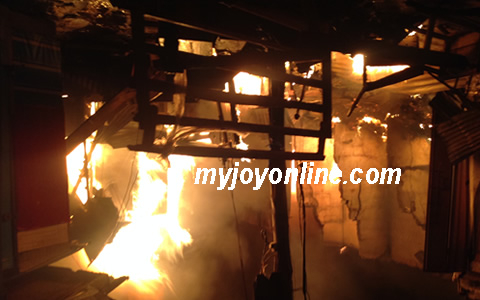 The Kumasi Central Market, described as the biggest open market in West Africa, has been ravaged by a second fire in eight months.

Luv FM's Erastus Asare Donkor reports that more than 100 shops have been levelled by the fire that started around 1:00 am Wednesday..

Goods worth millions of Ghana cedis have also been reduced to ashes by the blazing inferno.

"Devastated" shop owners and residents in the area looked on helplessly as the raging fire consumed their wares, Erastus said.

As at 4:30 am, personnel of the Ghana Fire Service had not arrived at the scene of the fire.

Although they have arrived at the scene, their firefighting efforts are being impeded by a lack of access to the burning shops.

Erastus reports that they have been able to douse some of the devastating flames.

In June last year, about 30 shops were razed down in a similar fire incident at the market.

Ghana Fire Service recommened a re-wiring of the entire market after the June 2013 fire, however, a trader who lost his shop to the fire says city authorities did not heed the advice.