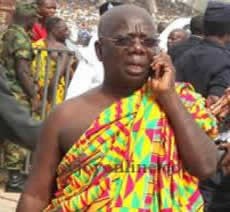 Former Chief of Staff Kwadwo Mpiani has debunked allegations he made away with some vital documents from his office as purported by government.

He cited specifically the office of the chief of staff where he said all important documents were carted off, thereby leaving the National Democratic Congress (NDC) government nothing to rely on in taking key decisions.

But Mr Mpiani- responding to the accusation on Peace FM’s Kokrokoo Monday- scoffed at government for what he described as infantile politicking and asked whether it was possible for him to keep such voluminous documents in his house.

He further argued that even if he made away with some documents as is being speculated, copies of them could be traced at other ministries since correspondences existed between his office and that of other ministries like the Finance Ministry.

He explained that officials from the Economic and Organised Crime Office (EOCO) approached him about a year ago seeking to find some documents they claimed were in his possession. Mr Mpiani said he told them he does not personally keep files made available to the office but that certain procedures were followed.

He challenged government to search his house if it was convinced he had something to hide, insisting he has no documents in his possession.