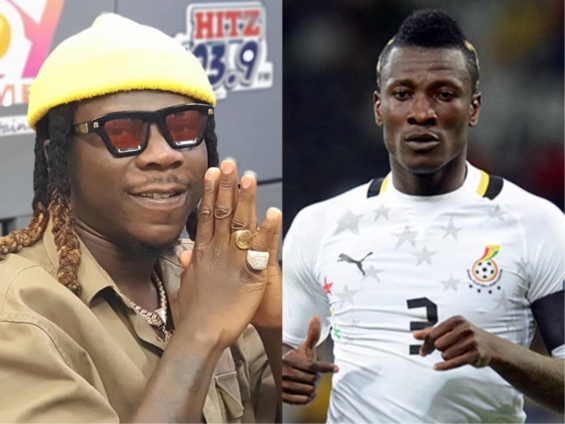 Musician Stonebwoy says that it is imperative to celebrate people who have achieved remarkable milestones for their country – in this case, Asamoah Gyan, for Ghana.

The ‘Therapy’ singer believes that the former Black Stars forward was right for saying he had not been celebrated well enough by Ghanaians.

“What Asamoah Gyan said is true,” said Stonebwoy. “I think we can do better at celebrating people who have worked so hard to put Ghana on the map,” he told Andy Dosty on Daybreak Hitz on Monday.

He continued, “It’s really important that we have to just deliberately focus on making sure that we sing people’s praise and give them the flowers they deserve.”

The five-time Reggae/Dancehall Artiste of the Year further admonished the public to accord the needed respect to people who have the nation at heart.

“It’s not going to start in Asamoah Gyan’s time only – people before him who have done well for the country deserve to be celebrated too. It’s a mindset we need to adopt,” he said.

Although Stonebwoy revers Asamoah Gyan and follows in his footsteps as an elder brother and a legend, he is not expectant of any form of celebration from Ghanaians, irrespective of his achievements, because “I don’t think it is yet time for that,” he said on Hitz FM.

After a successful ‘Therapy’ tour in Europe, the BET Award winner is currently on a media tour for the promotion of his upcoming event dubbed Ashaiman To Da World Festival.

The show will be held at the Sakasaka Park in Ashaiman on September 3, 2022.

DISCLAIMER: The Views, Comments, Opinions, Contributions and Statements made by Readers and Contributors on this platform do not necessarily represent the views or policy of Multimedia Group Limited.
Tags:
Asamoah Gyan
Daybreak Hitz
Stonebwoy