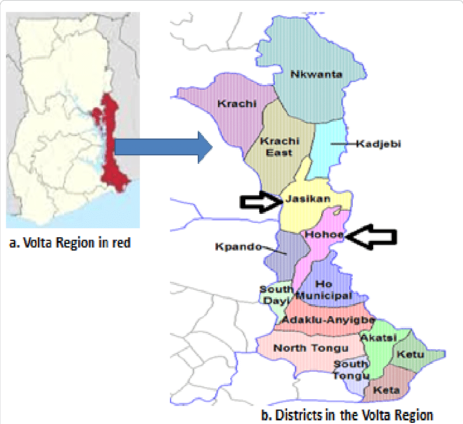 The Chiefs of Lolobi and Akpafu traditional areas have expressed concerns over reports that the Ministry of Local Government and Rural Development (MLGRD) is considering the creation of a new district for the Santrokofi, Akpafu, Lolobi and Likpe (SALL) in the Oti Region.

Therefore, the recent letter by the Local Government Minister to the Volta and Oti Regional Ministers on the proposed District was unacceptable.

The statement, which follows a Ghana News Agency report on the creation of the District, said Lolobi and Akpafu Traditional Areas were not part of the traditional areas that petitioned the Justice Brobbey Commission to be considered as part of the Oti Region; unlike the Santrokofi and Likpe traditional areas.

The statement said, “Lolobi and Akpafu people have never associated with all petitions for a new region and actively exercised the duty of care to alert all agitators in that regard to take cognisance and respect our desire to be exempt.”

It said the Lolobi and Akpafu traditional areas had been and would continue to be part of the Hohoe Municipal Assembly and were, therefore, seeking a constitutional and judicial order to gain recognition as such.

“We have visibly strengthened our bonds with the other seven traditional areas under the Hohoe Municipality, where we are deeply cherished and at peace,” the statement added.

It said when they were erroneously associated with the Oti Region referendum, they promptly reached out to the Electoral Commission to raise an objection to their inclusion, “practically boycotted the vote and, after the referendum, resorted to law to remedy the persistent trampling on our rights and freedoms in a Constitutional democracy”.

Meanwhile, the MLGRD has said that it is still in consultation with the chiefs of the respective areas over the creation of the District, and the location of its capital.

The creation of the constituency will, however, start with an Executive Instrument from the President, following which the Local Government Minister will send a Legislative Instrument to Parliament, which would have to stay in the House for 21 sitting days.

The Electoral Commission would create the Constituency when these conditions are satisfied.