Mahama only making comments on general observations, not undermining the Judiciary – Amaliba 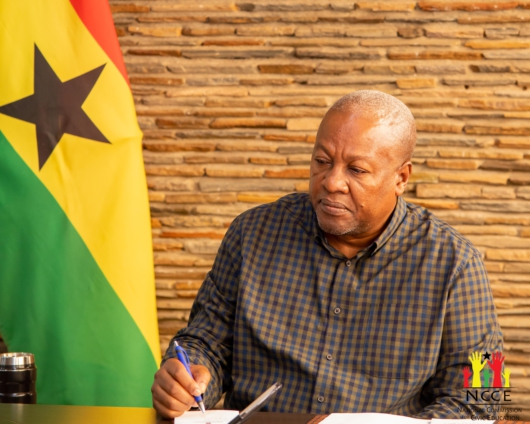 The Director of the Legal Directorate of the National Democratic Congress (NDC), Abraham Amaliba, says former President John Mahama’s recent critiques of the Judiciary are in no way meant to undermine the institution.

According to him, the critiques are general observations made by the former President which he hopes to bring to the forefront of discussions for those in power to address.

Mr. Amaliba was speaking in relation to some comments made by John Mahama concerning the Judiciary and the Chief Justice.

The Former President speaking at the NDC’s Lawyers’ Conference on Sunday, August 28, said it will take a new Chief Justice to repair the ‘broken image’ of the Judiciary.

Mr. Mahama explained that a perceived independent judiciary is a vital element in safeguarding the country’s democracy and therefore the need for a new Chief Justice to restore public confidence in the courts, which he said, have since become an item of ridicule and mistrust.

However, his comments have not gone unnoticed by the Attorney General who has taken great exception to them.

Speaking at the Ghana Bar Association’s Annual Conference on Monday, the A-G said John Mahama has developed the habit of criticising the Judiciary unnecessarily.

“Such conduct is clearly deplorable, coming from one who has occupied the highest office of President and aspires again to that office,” he said.

Reacting to this, Abraham Amaliba stated that Godfred Dame’s statement was uncalled for.

According to him, the Attorney General should have merely heeded to the counsel of the former President and found ways to address them.

“How would you now come to the conclusion that the President having made these observations is attacking the Judiciary? I thought that what the Attorney General should be doing was rather to be interested in these reports that are putting the Judiciary in bad light and to see how these can be addressed. But you don’t attack the person who is drawing your attention to something which is going wrong. You don’t do that,” he said.

He also stated that while former President Mahama’s statement concerning the saturation of the Supreme Court bench with judges allegedly from the New Patriotic Party’s camp has been misconstrued to be an attack on the Judiciary, it is rather an attack on the President’s discretionary powers of appointment.

DISCLAIMER: The Views, Comments, Opinions, Contributions and Statements made by Readers and Contributors on this platform do not necessarily represent the views or policy of Multimedia Group Limited.
Tags:
Abraham Amaliba
John Mahama