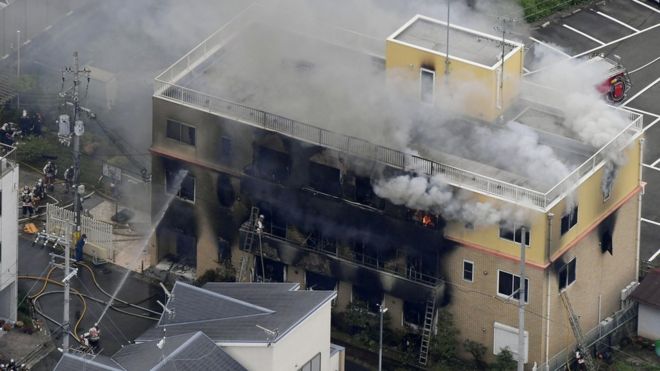 Police in Japan have charged a man 10 months after he allegedly set fire to an animation studio in Kyoto, killing 36 people.

Shinji Aoba, 42, had been in hospital since the arson attack in July 2019. He was so badly burned that police had been unable to question him until now.

Dozens more people were injured during the fire, which Mr Aoba has reportedly confessed to starting.

Kyoto Animation was well-known for series like K-On and Violet Evergarden.

The incident was described at the time by Japan’s Prime Minister Shinzo Abe as “too appalling for words”.

A police statement said Mr Aoba has been moved from a Kyoto hospital to police headquarters, but his injuries have left him unable to walk.

Eyewitnesses say he used petrol from two large containers to set fire to the ground floor of the animation studio. The building was filled with animation materials and was rapidly engulfed in flames.

Many of the 36 who died were young animators trapped on the upper floor.

Some reports have suggested he bore a grudge against the studio, accusing it of plagiarising his own work.