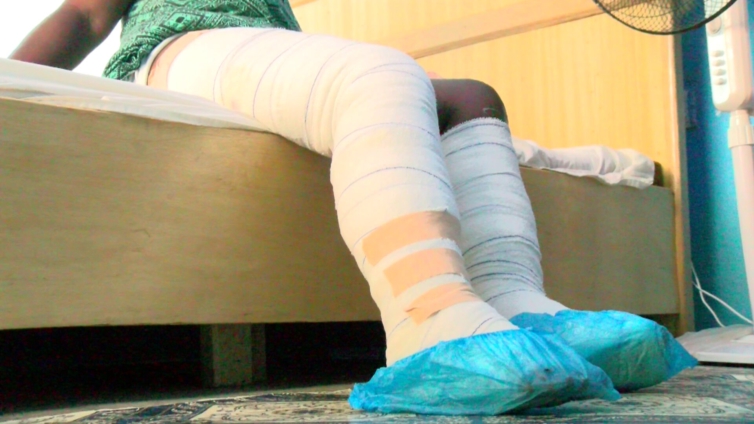 Victims of an arson attack at Meduma in the Ashanti Region have had to go without food to cater for their medical bills.

Patience Kwarteng, whose fiancé allegedly set their home on fire, suffered burns together with two of her children. Her first child died in the fire.

She has been discharged from the hospital together with one of her children. But her other child who suffered severe burns is under close medical monitoring.

Her 10-year-old son, a twin, Prince Osei was burnt to death in the fire. The boys was buried a week after the incident.

Akwasi Agyemang, the fiancé of Patience allegedly set ablaze his daughter and two other maternal siblings ablaze after a squabble.

Patience spent almost two weeks in the hospital. Her legs are bandaged rendering her unable to walk.

She is still in pain. But her major worry is the rising cost of hospital bills.

“I feel pains in my legs. The doctor keeps prescribing drugs which we struggle to buy. The surviving twin is still at the hospital, my mother spends about three hundred cedis on her drugs alone every two days. The last girl is well. She wasn’t burnt as the two of us. We now sacrifice food for ourselves for her medical bills,” she said.

The surviving twin daughter who is still at the hospital, now anaemic as the family struggles to foot the bills.

Grandmother of the ten-year-old is burdened as she struggles to take care of the family.

Patience regrets listening to the advice of people to take in her abusive lover.