Man City one win away from title after defeating Spurs 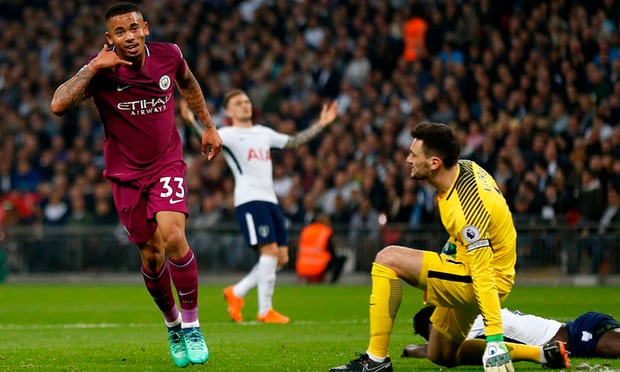 Manchester City are on the brink of winning the Premier League as they bounced back from their Champions League exit with victory against Tottenham at Wembley.

Pep Guardiola's side need just three points to be crowned champions, but they could win the title if second-placed Manchester United lose to West Brom on Sunday or to Bournemouth on Wednesday.

Otherwise, a City victory in their next game against Swansea on 22 April will be enough.

It was a morale-boosting win for City after the disappointment of Tuesday's defeat to Liverpool in the Champions League quarter-finals.

Despite completely dominating the first-half, there were some nervy moments as Tottenham got back into the match, until Raheem Sterling scored City's decisive third.

Gabriel Jesus had put City ahead in the 22nd minute, racing onto Vincent Kompany's long ball and sliding a low shot past Hugo Lloris.

Just three minutes later, the France goalkeeper conceded a penalty, with a studs up sliding challenge on Sterling, although replays suggested it occurred outside of the box. Ilkay Gundogan converted from the spot to double City's lead.

Against the run of play Christian Eriksen halved the deficit. Latching onto Harry Kane's through ball, his shot ricochet off Aymeric Laporte and then back off the Dane and in past Ederson.

After the break City withstood a period of sustained pressure from Spurs, before Sterling hammered in the rebound from Jesus' shot to secure all three points in the 72nd minute.

It inflicted Spurs' first league defeat since losing 4-1 at City on 16 December, ending an unbeaten run of 14 matches.