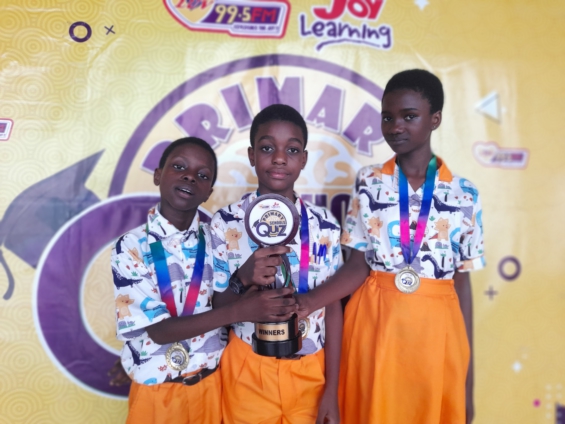 Manna International School has emerged champions of the 2022 edition of the Luv FM Primary Schools Quiz.

After a thrilling standoff between the three primary schools, Ridge International School 1966 and Hancygold Community School succumbed to the new champions of the competition.

The grand finale of the Luv FM Primary School Quiz ended in a resounding victory for Manna International School, after grabbing 114 points.

Though the contest was fierce and highly unpredictable, the contestants from Manna School put up an awesome performance in the riddles and lucky letters segments to lift the trophy.

Winners from Manna International School expressed their excitement in winning the third edition of the annual Quiz.

“With hardwork, determination, teamwork and the help of God, we won.  We said we’ll win and we have done it,” said the champions.

All finalists were rewarded with cash prizes, television sets, MultiTV decoders, tablets, stationery items among others.

The audience on radio and online have been treated to a terrific battle of wits by participating schools.

A total of 80 schools auditioned for the tournament, with 36 making it to the preliminary round.

The qualifying schools were paired in threes to compete against each other for the next stages of the contest.

Winners, Manna International School, promises to retain the title in the next edition, while other competing schools assured they will put up a better challenge to claim the title.

DISCLAIMER: The Views, Comments, Opinions, Contributions and Statements made by Readers and Contributors on this platform do not necessarily represent the views or policy of Multimedia Group Limited.
Tags:
LUV FM PRIMARY SCHOOL QUIZ
Manna International School