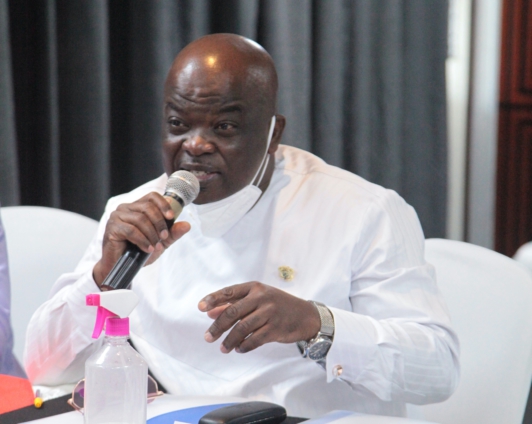 Ghana’s attempt to align its piracy legislation with provisions of the United Nations Convention on the Law of the Sea (UNCLOS) took a step forward when stakeholders at a forum, unanimously suggested a minimum of 15 years jail time for persons convicted of piracy.

Recent reports of piracy and other associated maritime crimes within the Gulf of Guinea (GoG) area have marked the region as a dangerous hotspot, necessitating immediate steps to nib the threat in the bud.

In his welcome address, the Director General of the Ghana Maritime Authority, Thomas K. Alonsi, stressed the severity of the problem.

A crew member was actually killed in the first quarter of 2021. Pirates operating within the Gulf of Guinea are attacking further away from shorelines and are unafraid to take violent action against innocent crews,” he said.

He said despite the increasing threat from piracy, the country’s current laws seem inadequate in dealing with the menace.

“The definition of piracy  under Sections 193 and 194 of Ghana’s Criminal and Other Offences Act, 1960 (Act 29) is completely obsolete, and inconsistent with contemporary definitions of piracy in international law and therefore, incapable of helping Ghana counter the threat posed by the scourge.

“A graphic illustration of the obsolescence of these provisions showed during mock trials presided over by Justices Merley Afua Wood and Richard Adjei Frimpong in 2019.

“The yawning need for legislative amendment is the reason we have gathered here today. As industry experts and practitioners, we are expected to discuss and approve the text of the proposed amendments to the relevant sections of Act 29 bordering on piracy.

“The Draft text was also simulated through a mock trial in October 2020 presided over by His Lordship, Justice Adjei-Frimpong of the Court of Appeal.”

Renowned maritime expert Captain (GN) Dr Kamal-Deen Ali (Retd.) lifted the lid on the gravity of the issue linking it to how close attacks currently are to Ghana’s territorial waters when the country was hitherto rather played a solid intermediary role to quell piracy on GoG.

“Although the attacks do not start in Ghana, we are very much affected and the incident last week proves this. As a stakeholder of the GoG, Ghana used to assist victims of piracy. The question is, now that the threat has come to our doorsteps, what is our fate; in fact, where do we stand? he queried rhetorically.

He then called for various tools, chiefly among them, legal tools, to combat the menace. “We need a modern legislation which is consistent with international laws, effective judicial system, and a robust criminal prosecution mechanism to prosecute piracy and other maritime related crimes.

“This may have to go with extradition, transfer of information, and mutual legal assistance that can help us with information to support our prosecution.”

Assistant maritime consultant and private legal practitioner, Nasir Alpha Mohammed, laid the foundation for the review for the review of the two sections of Act 29.

“As we all know Ghana is party to UNCLOS and many of the states that are party to the UNCLOS have started domesticating it. as a dualist state and is therefore still required under Article 75 to ratify UNCLOS domestically to make it applicable.”

He said of the primary purpose of the review was to addresses the procedural challenges under Act 29.

The participants at the forum deliberated on various aspects of the current law that criminalizes piracy and its associated prosecution as well as the proposed amendments.

They all agreed that Ghana’s law courts must condemn convicted pirates to a minimum of 15 years if Parliament amends Sections 193 and 194 of the Criminal and Other Offences Act, 1960 (Act 29).

DISCLAIMER: The Views, Comments, Opinions, Contributions and Statements made by Readers and Contributors on this platform do not necessarily represent the views or policy of Multimedia Group Limited.
Tags:
Ghana Maritime Authority
Piracy
United Nations Office on Drugs and Crime