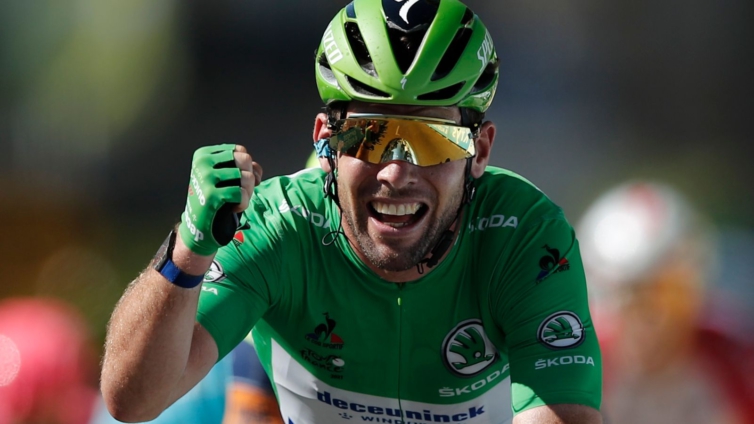 The Manx rider claimed the 34th stage victory of his Tour career when he crossed the finish line in Carcassonne to win the 13th stage of this year’s race.

Deceuninck-Quick-Step’s Cavendish has also won stages four, six and 10 on this year’s tour.

Speaking after his latest and record-equalling triumph, the 36-year-old described how competing and winning stages in the Tour was “what I dreamed of as a kid.”

“If any one of my wins can inspire kids to ride the Tour de France… that’s what means the most to me,” he added.

Cavendish described himself as “dead” after his victory in Friday’s 13th stage, which took the peloton 220 km from Nimes to Carcassonne in temperatures approaching 30C.

Yet the finale of the stage – like almost all of Cavendish’s wins – came down to the last few metres, as he held off a challenge from Belgian 23-year-old Jasper Philipsen.

“I can’t even think about (the record). I’m afraid I’m so dead after 220km in that heat, that wind and that finale, phwoar.

“I went deep, I went so deep there. The boys were incredible. I can’t believe it. A lot of the day it didn’t feel like it (was going to happen) but it had to happen because I had the guys riding like they were.

“I was so on the limit there.”

He could yet surpass Merckx’s record, which had stood since 1975, with two more sprints in the final week, ending with the Champs-Elysees finale in Paris, where Cavendish has won a record four times.

It caps a remarkable turnabout in fortune for the sprint specialist who had hinted last year that his career may be over after a run of poor form and illness.

In October, Cavendish suggested he may retire from cycling at the conclusion of the Gent-Wevelgem race in Belgium.

He said that race could be his final one, but signed for Deceuninck-Quick Step for the 2021 season and was drafted onto the team’s Tour de France roster after an injury to his teammate and fellow sprinter Sam Bennett.

In 2018, Cavendish took an indefinite break from cycling “due to the presence of the Epstein-Barr virus”.

The sprinter had been “unknowingly training and racing” with the bug for a number of months.

The Epstein-Barr virus is most commonly known as being the cause of glandular fever.

Cavendish said at the time that he has “not felt physically myself and despite showing good numbers on the bike, I have felt that there’s been something not right.”

The rider turned professional in 2005 and was selected for his first Tour de France, but abandoned the race at stage eight as it reached the Alps.

In 2008, he won four stages and came first in six stages the following year.

He has also won 15 stages in the Giro d-Italia and three in the Vuelta a Espana; cycling’s two other Grand Tours.