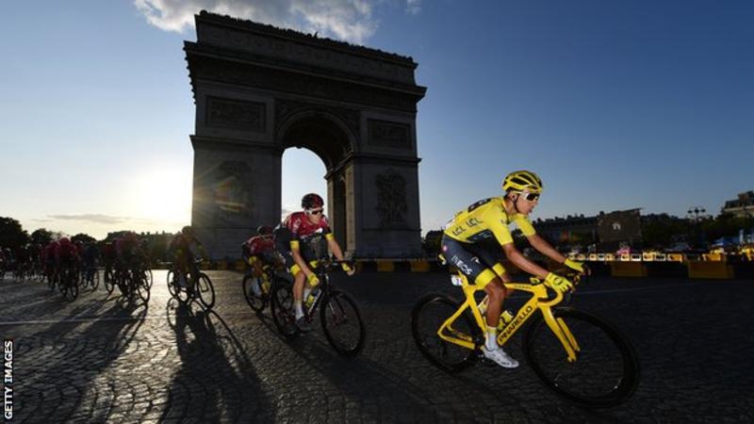 The postponed 2020 Tour de France will now start on 29 August, following the French government’s extension of a ban on mass gatherings to mid-July because of the coronavirus pandemic.

Cycling’s biggest event, won by Team Ineos’ Egan Bernal last year, was originally due to run from 27 June to 19 July.

“Holding this event in the best conditions possible is judged essential given its central place in cycling’s economy,” said the sport’s governing body the UCI.

Many large-scale sporting events due to take place this summer have either been called off, like Wimbledon, or pushed back by a year, such as football’s European Championships and the summer Olympics.

Four-time winner Chris Froome is set to return at this year’s Tour, which is due to start in Nice, after he missed last year’s race following a high-speed accident in which he broke his neck, femur, elbow, hip and ribs.

He tweeted: “The news many of us have been waiting for. Some light at the end of the tunnel.”

Cycling’s two other three-week Grand Tour races have also been re-scheduled for later this year, as part of a plan by the UCI to stage all major cycling races this season.

The Giro d’Italia – which was due to take place in May – and the Vuelta a Espana, originally set for September, will now be raced after September’s World Championships.

The championships, which will be held in Switzerland, remain in their 20-27 September slot, which means the Tour de France will finish on the same day the championships begin.

The postponed ‘monument’ one-day races – Milan-San Remo, Liege-Bastonge-Liege, Tour of Flanders and Paris-Roubaix – “will all take place this season, at dates still to be defined”, added the statement.

The UCI cautioned that the calendar will remain dependant on the “world health situation”, with the body’s president David Lappartient saying “we still have work to do to finalise the establishment of an entirely revised calendar”.

On 10 April, the UCI furloughed staff and cut the salaries of senior staff as a result of the coronavirus pandemic.

The women’s version of the Tour, La Course by le Tour de France, was initially scheduled to take place over one day on 19 July on the Champs Elysees in Paris. But Tour organisers ASO said it will also be postponed and take place “during the Tour de France 2020”.