Men are paying to have their private parts whitened 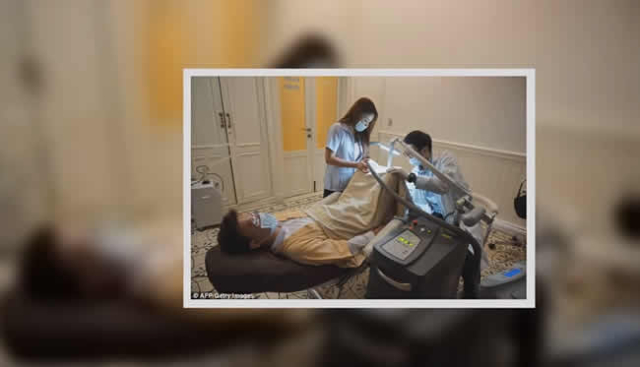 Thailand’s fascination with skin whitening treatments is well known, but while most people opt to have the most visible parts of their bodies whitened, an increasing number of men are undergoing special laser procedures on the dark parts of their groin region.

News of the “penis whitening” craze in Thailand reached the Western world a couple of days ago, after photos of men undergoing the unusual procedure at the Lelux aesthetic hospital outside of Bangkok went viral on social media.

They showed a number of men lying down on a medical chair while hospital staff operated the “Pikachu laser” on their groin region. If that name sounds a bit strange, you should know that the popular Pokemon is slang for “penis” in Thailand.

The Lelux Hospital, famous for its body whitening procedures, launched the penis whitening service in July of last year, and is currently struggling to keep up with demand for it from Thai men. According to Tech Times, the Bankok hospital now has around 100 clients a month, or up to 4 clients a day, willing to pay $650 for the five-session treatment.

“It is so fast, thanks to social media. Now, people need to book the treatment a week in advance,” Popol Tansakul, Lelux’s marketing manager, told DPA. “We are simply responding to our clients’ needs. Many of them have asked for treatments of specific areas.”

The penis whitening procedure was apparently inspired by a similar laser treatment offered exclusively to women. Pioneered around the same time, the service also attracted the attention of men, who started asking for it, so Lelux decided to give men the option to have their private parts whitened as well.

According to representatives of the Thai hospital, the treatment involve the same pigmentation laser equipment used in other skin whitening procedures, and is certified by Thailand’s Ministry of Public Health. It is supposed to decrease the level of melanin in the skin considerably, leaving the affected area looking lighter and “pinkish”.

Despite its unexpected popularity, the penis whitening procedure poses some health risks, according to Thai health experts.

“The skin of the private parts is sensitive. Such laser services may cause irritation, allergies and inflammation,” Health Service Support Department deputy director-general Dr Thongchai Keeratihuttayakorn told reporters. “What if your skin becomes spotted?”

Dr. Mingkwan Wichaidit, director of Thailand’s Department of Medical Services, recently told Morning News that the treatment has just a temporary whitening effect. He claims that our bodies will still build melanin and reverse the effects of the procedure. Mingkwan adds that there is no research to support that laser treatment on the sensitive skin of the penis is completely safe and warns that it could cause infection and scarring.

The Lelux Hospital maintains that all of the clients it has treated so far have been “happy” with the result.