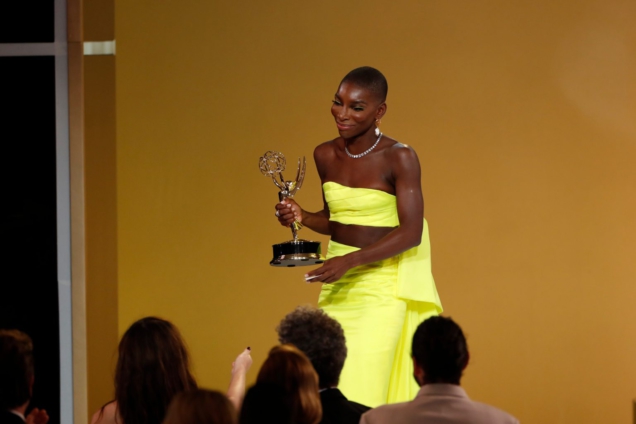 Michaela Coel won an Emmy for Best Writing in a Television Limited Series or Movie, for her work on HBO and BBC’s ‘I May Destroy You’.

In addition to writing, Coel also created, produced, directed, and starred in the series. Also up for the award, last night were Mare of Eastown, The Queen’s Gambit, and three episodes of WandaVision.

I May Destroy You follows a young writer struggling with the aftermath of a sexual assault and is inspired by Coel’s own experiences. Coel was also nominated for Best Actress in a Limited Series or Movie.

As she took the stage, Coel gave a succinct, yet powerful speech. Coel gave one of the night’s shortest speeches, and perhaps it’s most revealing. In her remarks, Coel did something unusual: She thought about her audience, tried to reach beyond the other entertainers seated in the room with her.

“Write the tale that scares you, that makes you feel uncertain, that isn’t comfortable. I dare you… Visibility these days seems to somehow equate to success. Do not be afraid to disappear—from it, from us—for a while, and see what comes to you in the silence.”

She spoke directly to the potential storytellers hoping to one day be on stage. And she didn’t just advise them on a night of pomp and circumstance, she reminded them of the value of quieter triumphs.

The HBO limited series “I May Destroy You” was controversially snubbed by the Golden Globes but later received six Primetime Emmy nominations.