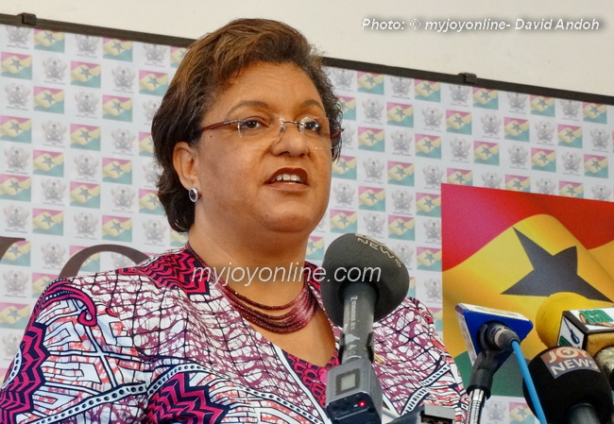 The Minority in Parliament are demanding the Foreign Affairs Minister, Hanna Tetteh appears before the House to explain why 226 persons were issued with diplomatic passports within the first half of 2014.

The NPP Members of Parliament also want to know who were given the diplomatic passports.

MP for Okaikoi South, Patrick Boamah who filed an urgent question in Parliament today on behalf of his colleagues told Joy FM's Top Story the number quoted in the 2015 budget statement to Parliament last week was "huge".

The question has become necessary following the arrest of a young Ghanaian woman in Heathrow about a fortnight ago for attempting to traffic 12.5 kilograms of cocaine into UK valued about 5 million Euros.

The woman at the centre, Nayele Ametefeh aka Ruby Adu Gyamfi, has confessed that she used the presidential lounge (VVIP) at the Kotoka International Airport. Though she travelled on an Austrian passport, she is also said to be a holder of a Ghanaian diplomatic passport.

Persons believed to have aided her use of the presidential lounge have been arrested and arraigned.

Patrick Boamah told Joy FM’s Top Story the Foreign Affairs Minister would tell the House the category of persons who qualify to be issued with diplomatic passports – for what purpose and their designations -, as well as those who qualify to use the VVIP lounge.

He said the minister had previously briefed Parliament about the kind of people allowed to use the VVIP lounge but the House wants to know if the ministry has reviewed the qualification.

Deputy Minority Leader, Dominc Nitiwul told Joy News discussions are being held with the Majority Leader, Alban Bagbin on how to deal with the cocaine issue once and for all because it affects the integrity of the country.

He is hopeful the Majority Leader who is not “overly politicized” on issues would side with them.

He also wants heads to roll at the Narcotic Control Board, and made specific mention of Deputy Executive Secretary of NACOB, Richard Nii Lante Blankson who signed a statement on NACOB’s involvement in the arrest of Nayele, which was discounted by the UK High Commission in Ghana.

The Majority in Parliament has welcomed the move by the Minority to ensure that narcotics issues are addressed.

Majority Chief Whip, Muntaka Mohammed Mubarak told Top Story it is their wish “we can find an amicable way of dealing with this issue”.

However, he was not happy about Minority’s approach to the issue, which he described as “double standard”. The Minority held a press conference Wednesday morning, which content Muntaka said was too partisan, but later came to the house to ask for a bipartisan way of fighting the narcotics menace.

A “sincere and honest” way of handling such issue is to start from the floor of the House, and not the other way round as the Minority did.