Minority’s call for IGP to resign is misplaced – Seth Acheampong 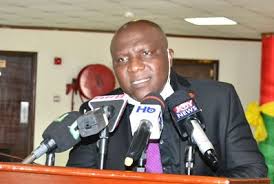 The Chairman of Parliament’s Defence and Interior Committee of Parliament, Seth Acheampong, says the minority’s call for Inspector General of Police (IGP), James Oppong-Boanuh to resign is misplaced.

He believes the IGP should be granted the opportunity to brief Parliament on the operational activities of the Service during and after the 2020 election exercise.

Minority Spokesperson of Defence and Interior, James Agalga, on the back of shooting incidents that claimed the lives of five civilians, demanded today that the IGP be relieved of his post.

“The IGP appeared before Parliament and assured us that he was the Chairman of the National Election Security Taskforce…yet under his supervision, five lives have been lost, yet he’s still at post. If I were in his shoes, I will do the honourable thing by resigning. But if he wouldn’t resign they should dismiss him,” he said.

But speaking to Joy News Friday on the recorded cases of violence in the country during the elections, Mr. Acheampong is of the view that in as much as the Ghana Police Service needs to be held responsible for their actions, fans and supporters of candidates and political parties should equally be checked.

“If you’re doing an entire assessment of the deployment, we did well as a country and we must pat ourselves on the back. We should however condemn the excesses.

“As you admonish and talk to the security personnel to also restrain themselves at the least provocation, we must admonish ourselves as country people to ensure that we take our civic duties responsibly so as not to go overboard,” he added.

Meanwhile, the Criminal Investigations Department (CID) has revealed that investigations are being conducted to unravel personnel behind the said shootings.

IGP James Oppong-Boanuh is to appear before Parliament next week.