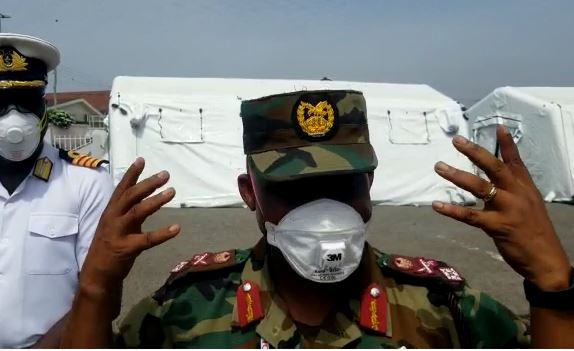 Brigadier General Nii Adjah Obodai told journalists on Tuesday, that the PPEs they have are in short supply, adding their “main request, is for full cover PPEs.”

He explained the personnel who engage directly with the patients need to be fully prepared “from head to toe.”

“If you are not careful and we run out of it, you put everyone’s life in danger,” Obodai lamented.

President Nana Akufo-Addo, meanwhile, said in his address to the nation on Sunday, that more of the protective equipment will be supplied to health workers.

He said government has engaged some local companies to produce PPEs in mass quantities and production will start Tuesday.

Also of concern to the authorities at 37 Hospital, is the increasing delay in receiving test results for persons they have under isolation.

He said they were initially given six hours for results to be returned but now they have to wait up to four days for them to receive test results.

These persons are being kept in air-conditioned tents in the premises of the hospital but the officer says the anxiety in waiting coupled with the mental stress is not good for them.

He underscored the point that there were only two testing centres in the country doing the testing – Noguchi Memorial Institute for Medical Research and Kumasi Centre for Collaborative Research in Tropical Medicine – and acknowledged the workload on them.

Brigadier General Obodai called for mechanisms to be put in place so “we could get results much earlier,” adding “we would be in better shape.”

Meanwhile, the country’s case count stands at 287, according to the Ghana Health Service. Fatalities remain five.