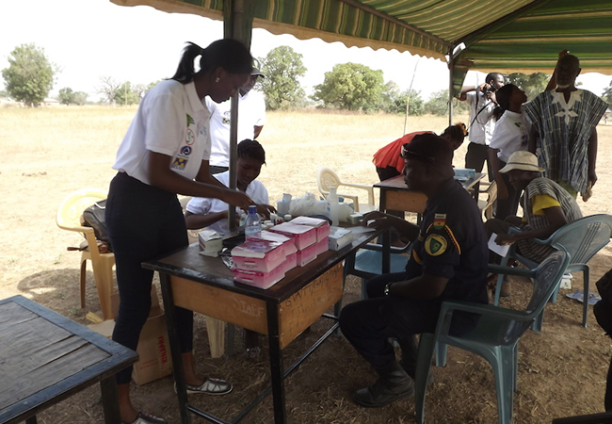 Over 2500 people across communities in the Upper East Region have benefited from a two-day, free medical screening exercise.

A Naa Okailey Shooter Foundation project, it saw communities including Basengo-Kalbeon, as well as Tongo among others, benefit.

Beneficiaries had thorough medical examinations conducted on them by a team of doctors and nurses from the Korle-Bu Teaching Hospital.

A successful event, the beneficiaries were also given medicines that took care of various conditions. Those with rather complicated cases were referred to an established health facility in the region.

Touching on why they decided to hold the exercise, Miss World Africa, 2013, Naa Okailey Shooter, who is the Director of the Foundation, said it was in fulfillment of their core vision and mission.

The Foundation she said is committed to bringing quality healthcare to the doorstep of persons who can’t afford to have one.

“This is the first in many programs we will be carrying out. The numbers we have seen here speaks to our vision. We are encouraged by this, and would work towards making quality healthcare affordable,” she told a pre-exercise durbar at Basengo.

Paul Quartey, M.D, Eden Security, and a key partner to the Foundation underscored the need for quality healthcare, adding his company came on board because of the whole idea of giving back.

“For some time now, we’ve been thinking of how to give back to society. So when the Naa Okailey Shooter Foundation came knocking, we knew this was a laudable project, that needed support.”

Quartey adds: “This is by far the most forward-looking corporate social responsibility project we’ve embarked on this year. We are happy to be a key partner to the Foundation.”

Community leaders in all areas visited applauded the organizers, saying the outreach came at the right time.

Assemblyman for the Basengo Electoral Area, Ernest Azure, said the whole community was overwhelmed by the gesture, adding, “This is something we will never forget.”