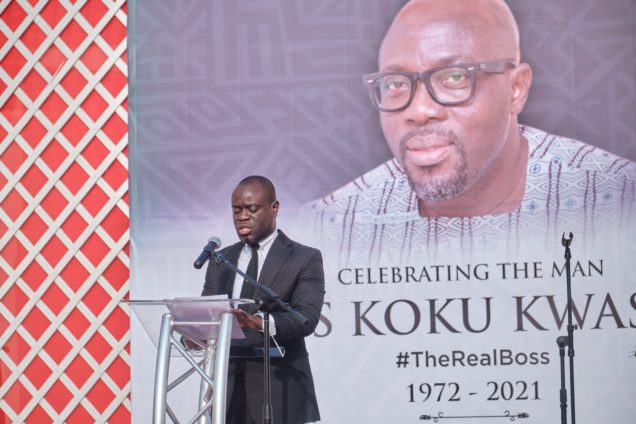 This was at a remembrance service at the forecourt of Joy FM where colleagues, family and friends had convened to share fond memories of the seasoned media practitioner.

Mr Kwashie died after a short illness at the University of Ghana Medical Centre (UGMC) on Tuesday, December 28, 2021.

In his own way, Nathaniel Attoh decided to perform a heartfelt elegy in which he lamented the loss of the man he considered a boss and friend.

“In utmost humility dear Lord, we the sons and daughters are tempted to ask the father – Why did you not listen to our prayerful cry?

“And drenched in the heartbreak our sore vocal chords almost chant W-H-Y ! For the once fluid River Koku Elvis Bonuede of living water has eternally run dry,” he said.

Prominent personalities such as the CEO of the Multimedia Group, Kwasi Twum, Information Minister Kojo Oppong Nkrumah, President of the Ghana Journalists Association (GJA) Roland Affail Monney, among others.

DISCLAIMER: The Views, Comments, Opinions, Contributions and Statements made by Readers and Contributors on this platform do not necessarily represent the views or policy of Multimedia Group Limited.
Tags:
Elvis Kwashie
Memorial
Nathaniel Attoh