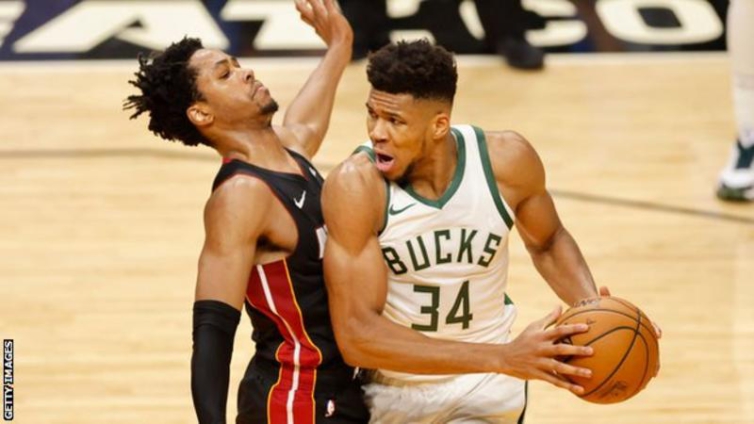 The Milwaukee Bucks set an NBA record of 29 three-pointers in a game in a 144-97 win over the Miami Heat.

The Bucks dominated – leading by as many as 51 points at one stage – and broke the Houston Rockets’ record of 27 three-pointers in a single game.

Orlando Magic beat Oklahoma City Thunder 118-107 and have now won the first four games of a season for the first time in their 32-year history.

Only Orlando and Atlanta Hawks remain unbeaten in the new NBA season.

The Phoenix Suns sit second in the Western Conference after a comfortable 111-86 win over the New Orleans Pelicans, in which Jae Crowder scored a season-high 21 points.

Julius Randle hit 28 points as the New York Knicks beat the Cleveland Cavaliers 95-86, while the Washington Wizards’ 115-107 loss to the Chicago Bulls means they have lost their first four games of a season for the first time since 2012-13.

Jayson Tatum scored 14 of his game-high 27 points in the fourth quarter as the Boston Celtics rallied to beat the Indiana Pacers 116-111.

And Andrew Wiggins put on a late show – scoring 13 of his 27 points in the final eight minutes – as the Golden State Warriors overcame the Detroit Pistons 116-106.

Warriors’ Stephen Curry led all scorers with 31 points as the Pistons lost for the second time in as many nights to leave them with four defeats from four matches.

De’Aaron Fox got 24 points and nine assists as the Sacramento Kings beat the Denver Nuggets 125-115 while Joel Embiid shone for the Philadelphia 76ers with 29 points in their 100-93 win over the Toronto Raptors.

The Raptors have lost their first three games of a season for the first time since 2005-06.