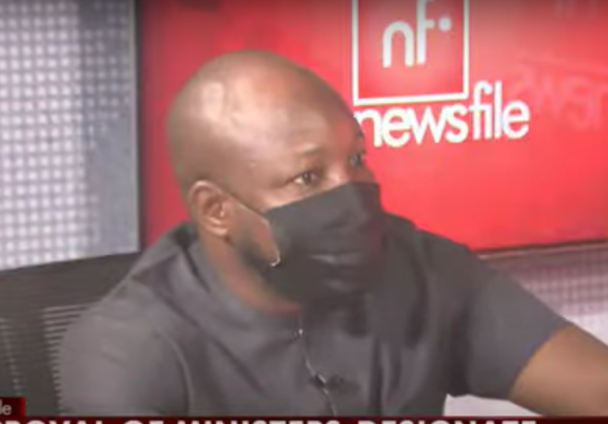 Legal practitioner, Rainer Akumperigya has expressed worry over the decision made by some NDC MPs to approve a number of ministerial nominees appointed by President Akufo-Addo.

Speaking on JoyNews’ Newsfile on Saturday, Dr Akumperigya described the sudden and unexpected decision made by some members of the Minority as problematic.

He told Samson Lardy Anyenini, that as a member of the grassroots for the National Democratic Congress (NDC), the approval of some appointees including now Fisheries and Aquaculture Minister, Mavis Hawa Koomson causes him and many supporters pain.

“The Minority itself wrote some thesis and theorized why certain people should be rejected. That was within a week, so you had a principled position on a basis of qualifying criteria that thought these nominees as being incompetent or lacking the competence to be approved ministers of our state.

“Then within a week you make a U-turn. That is problematic. It is much of inability to stay together on course or on principle and that hurts.”

“I am as hurt as any of the grass root people. At a time that we were building momentum, the events of January 6 at midnight, the NDC Minority Caucus had created some semblance of unity and togetherness as we have seen in other places and I expected that same solidarity to exist going forward,” he added.

He indicated on the show that the country has missed an opportunity to address the issue of excessive power being given to the Executive.

“So going forward, what kind of bills are going to pass through Parliament. Does it for tell that we are going to have the Agyapa’s rear their ugly heads again,” he quizzed.

President Akufo-Addo on Friday, swore-in some 28 ministers-designate who have been vetted and approved by Parliament at the Jubilee House.

On the approval of Hawa Koomson as Minister for Fisheries, Dr Rainer Akumperigya said the MP for Awutu Senya East failed to impress the Ghanaian populace during vetting on how she plans to head the fisheries sector.

He indicated that a majority of Ghanaians had wanted the legislator to be rejected.

“If we were to do some census or poll to find out how many Ghanaians would actually have wanted some of the nominees like Hawa Koomson to be dropped, you are going to have a resounding majority number of Ghanaians because there are many Ghanaians looking for substance.

“They want their material wellbeing to improve and they will vote because of some of these things. The least they can have is [someone] impose on them someone who doesn’t have what it [takes] to publicly grasp the basic issues,” he said.

According to the him, the precedent being created is whoever the President nominates automatically becomes a minister of state.

“There are always supervisory notes from the Chief of Staff on who is and not doing well. I am surprised. If I want to commend generally on the list he has submitted to Parliament, you’d notice that they are people who are very loyal. I think the President just went for loyalty besides any other thing,” he explained.

Meanwhile, Dr Akumperigya is urging the executives of the NDC to remain calm in addressing its present issues.

“We as a party now are in a very difficult situation and no one should think 2024 is from distant future, it starts now,” he said.

His call follows a statement presented to the NDC leaders in Parliament; Alban Bagbin, Haruna Iddrisu and Muntaka Mubarak by the party’s Communications Officer, Sammy Gyamfi.

Mr Gyamfi has accused the said personalities in Parliament of betraying the NDC after approving some “undeserved” ministers-designate appointed by the President.

DISCLAIMER: The Views, Comments, Opinions, Contributions and Statements made by Readers and Contributors on this platform do not necessarily represent the views or policy of Multimedia Group Limited.
Tags:
Akufo-Addo
Dr Rainer Akumperigya
National Democratic Congress
Newsfile
Parliament