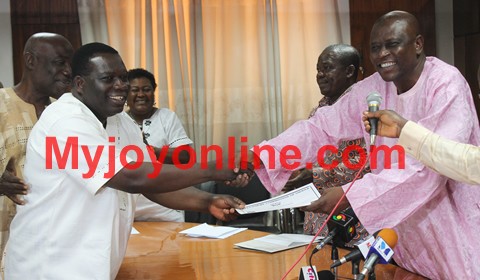 The Electoral Commission (EC) has officially presented the National Democratic Party (NDP) with a license to operate as a political party in Ghana.

Dr. Josiah Ayeh, in accepting the license said, Ghanaians must “make sure that democracy produces for us the best that there is for mankind and in fighting under the auspices of democracy, we [adhere] to the entire legacy of world democratic struggles and freedoms.”

He assured that, “hence forth we will operate as a political party, and we say to every Ghanaian that we will engage in clean politics. For us, the politics of insults are a thing of the past because we know that the scales have fallen from the eyes of our people and rationality and reasoning have taken centre stage.”

The Interim Chairman promised that the NDP will not undermine people and will not also engage in unsavoury activities stressing, “we say that we will abide solidly by their rules and I believe that they will be proud of us the way in which we will cooperate and carry on our electoral activities and our operations.”

Dr. Joseph Manboah-Rockson, General Secretary of the NDP told Election Headquarters on Joy FM Friday that, the license will give the party “the chance to process our candidates and to elect our flagbearer after we go to congress in a few days.”

The party, he said, will now go ahead to put further structures in place in compliance of with the political parties’ law and also ‘elect’ parliamentary candidates for the 2012 elections.

Kwesi Amakye speaking on the NDP’s chances in the 2012 elections said “as far as December 2012 is concerned, their chances are very negligible. I don’t think they have their eyes on winning December’s elections.”

He observed that it is good that the NDP participate in the 2012 elections so they introduce themselves to Ghanaians “that they are here and they are in for business.”

Touching on the possible selection of Nana Konadu as the party’s flagbearer, Kwesi Amakye noted that irrespective who is nominated as flagbearer, “they don’t have so much time to mobilize as many support as possible to enable them become competitive in December’s elections.”