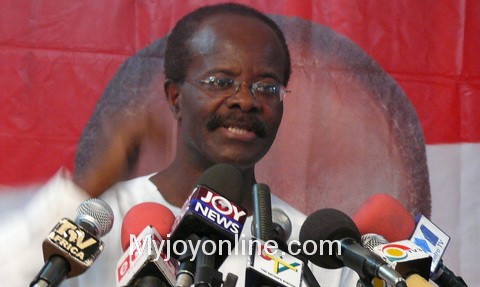 According to him, the two parties having presided over massive corruption and economic instability in their regimes don’t have the moral right to seek re-election.

Dr. Nduom who was addressing the media in Accra said the two dominant parties have done nothing than to seek their selfish interest when in power.

Citing the crippling economy, energy crisis and depreciation of the cedi to buttress his point, the PPP leader said the NPP and NDC should be blamed for Ghana’s woes.

Dr. Nduom disclosed that he is in talks with other smaller opposition parties to form a coalition to oust the two dominant parties in Ghana.

He underscored the need for a formidable political party to break the NDC, NPP monopoly in Ghana’s body politic.

“Any administration with the NDC and NPP in it would not work" Dr. Nduom stressed.

Dr. Nduom said a coalition is necessary especially in the 2016 elections “if we want to see an end of the NDC misrule”.

“It will be such injustice to Ghanaians to see any party in power come January 2017 that is not the Progressive Peoples Party  or that does not include the PPP because we will be the stabilising factor in any administration come 2017” he added.

The presidential hopeful said the PPP and its allies will give sufficient reasons and explanation on why Ghanaians should not continue to be voting the same way.

“It is important that we send a clear message to Ghanaians that if you continue to do the same things, you will see the consequences of it and when that happens, don’t come to us” he stressed.