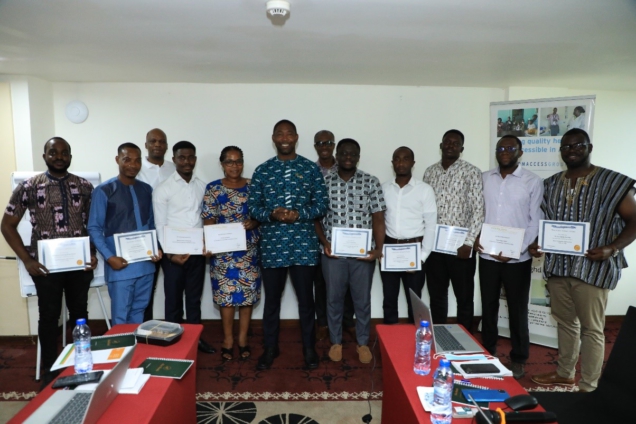 The Chief Executive of the NHIA, Dr. Bernard Okoe-Boye has announced that the organization has institutionalized a Data Analytics Unit in its organogram for the first time in its almost 20-year history.

Dr. Okoe-Boye said this during a capacity–building program organized for selected staff of the National Health Insurance Authority (NHIA) in partnership with the PharmAccess Foundation.

The program was designed to provide the selected staff of the NHIA’s Claims Processing Center, Actuarial and Management of Information System Directorates with the skills needed to have complete control over the NHIA’s Data Analytics System.

He said the Management of NHIA is pursuing a 5-Point turn-around strategy dubbed 5D’s@2D to revamp operations of the scheme through Digitization, Development, Dissemination, Data, and Decentralization by 2023. For him, this move is part of a holistic plan to make NHIA the most visible and responsive public service organization in Ghana and to expand membership coverage for the achievement of UHC 2030.

NHIA boss thanked PharmAccess Foundation for their unwavering support over the years. He urged the NHIA team to be fully committed and make the most of the training so that the NHIA’s data will be in good hands.

According to Dr. Okoe Boye, the NHIA is now better positioned as a strategic purchaser that ensures transparency regarding adherence to treatment protocols and benchmarking across providers for better health outcomes. This training also helps to improve operational efficiency in the management of NHIS members, providers, and resources.

PharmAccess has been working with NHIA since 2019 to support NHIA in the digitalization of claims and getting value out of this data. This is in line with the goal of transforming NHIA into a data-driven insurer making the most of its own data for Ghana’s Universal Health Coverage (UHC) 2030 agenda.

“Data is the new gold of the world. If you’re not looking at your data, you’re not different from someone who doesn’t have data. Every decision that the NHIS makes, going forward must be driven by data towards getting to financial sustainability. Dr. Maxwell Antwi stressed.

This is why PharmAccess’s partnership and support for the NHIS is key in its digitization drive. PharmAccess provides technical assistance to make the NHIA a data-driven insurer and knowledge institute that capitalizes on the disruptive potential of technology to create value out of its data.

PharmAccess Foundation is an international non-profit organization with a digital agenda dedicated to connecting more people in sub-Saharan Africa to better healthcare. By making use of public-private partnerships, they leverage donor contributions, which they believe will pave the way for private investments thereby contributing to healthier populations and social and economic development.

There were international participants from PharmAccess Tanzania and several facilitators from the PharmAccess offices in Ghana and Amsterdam. The participants were taken through Data visualization with Power BI and training on agile/iterative working.

DISCLAIMER: The Views, Comments, Opinions, Contributions and Statements made by Readers and Contributors on this platform do not necessarily represent the views or policy of Multimedia Group Limited.
Tags:
Bernard Okoe-Boye
NHIA