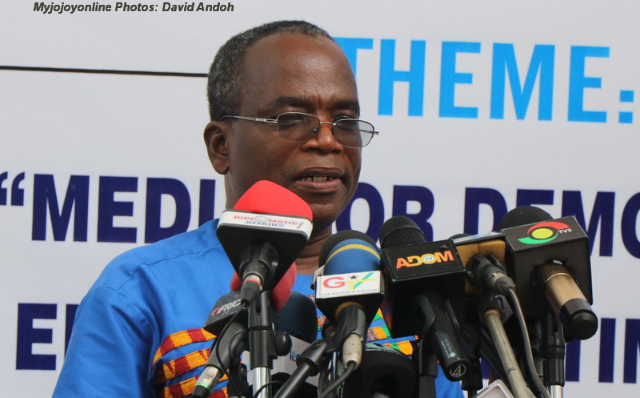 The Chairman of the National Media Commission has bemoaned the lack of funding for an initiative that was engineered to see to the safety of journalists in the country.

According to Yaw Boadu-Ayeboafo, the initiative which was being developed with support from government and UNESCO hit a snag after funding to see it take fruition ceased coming from the government.

Speaking on JoyNews’ PM Express on Wednesday, he revealed that the initiative was being designed to monitor and evaluate the safety of journalists operating in Ghana.

“In 2020 there were attempts at developing this mechanism with support from UNESCO. Initially the Ministry of Information felt that it was the body that was to handle that. There were a lot of suggestions that the National Media Commission is better placed to handle that matter.

“Eventually the government came back and accepted that the coordinating mechanism for the safety of journalists must be a responsibility that must be ceded to the National Media Commission and therefore that was done.

“But it requires that we develop, I mean, mechanisms that will monitor, measure and take account of such things and will require funding,” he said.

According to the Report, Journalists’ safety has deteriorated sharply in recent years. In 2020, reporters covering the effectiveness of anti-Covid-19 measures were attacked by security forces.

The Ministry of Information in reaction had stated that to ensure journalists safety, it was working with the NMC on an intervention called the Coordinated Mechanism on the Safety of Journalists.

It further added it will be collaborating with the NMC to see to the full execution of the intervention.

However, with the funding from government not forthcoming, the NMC says it is currently liasing with UNESCO to access funds for the development of the initiative.

“The funding has not been forthcoming and so we are at the stage where we need to get consultants to help develop the standards that will be used in measuring some of those things so that at least they will be in tandem with universal standards by way of measuring what the safety of the journalist are.

“So we are working with UNESCO on getting some funding and some consultants to develop that scheme. That is where we are now,” Yaw Boadu-Ayeboafo said.