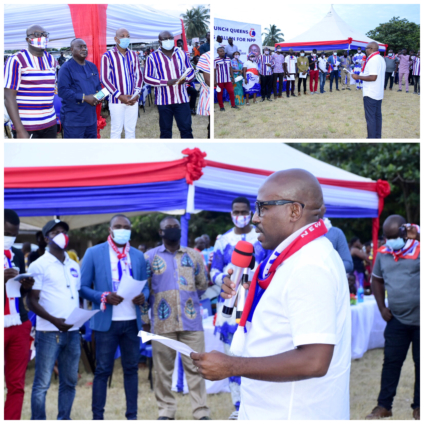 The New Patriotic Party (NPP) has inaugurated what it terms a strategic campaign committee to implement the agenda of winning the Ketu South parliamentary seat and increase votes for President Akufo-Addo in the December polls.

The committee would spearhead campaign activities in the opposition National Democratic Congress’ stronghold, hoping to overturn the over 57,000 votes gap in the 2016 general elections.

Inaugurating the committee, the Volta Regional NPP Chairman, Makafui Woanyah, urged the members to be committed to their respective roles to consolidate the gains of the party.

He expressed optimism, a well-mapped campaign laced with engagements at the grassroots on development projects delivered in the area will contribute woo electorates to vote for the NPP.

“The NPP which the people of Ketu South don’t vote for provided the constituency a Divisional Police Headquarters, a fire station station among others, not to mention the numerous social interventions of which they equally benefit,” he said.

He indicated that the quantum of development harnessed in Ketu South by the NDC over the years does not equate the massive votes it received in previous elections, which depicts the opposition party is only taking Ketu South Constituency and for that matter the Volta Region “for a ride.”

“Considering the percentage of votes the NDC gets in Ketu South, they should have constructed roads in gold to the homes of electorates.

“When they were looking for a running mate, the went to the Central Region where they receive just about 40% votes.”

“We believe in empowering the individual to be self sustaining, that is the core philosophy of the party”, he stressed.

Mr Woanyah, therefore, implored Ketu South constituents to try the NPP Parliamentary Candidate, David Tianor, since the NDC members of parliament who have represented the constituency all through the fourth republic failed to deliver.

Mr Tianor indicated that he has been a grassroots person, hence, has identified the challenges of locals and ready to resolve and harness development to the Ketu South if voted for.

He added that he had already started delivering his developmental agenda for the constituency and hopes to do more if given the node come December 7.

“Though I have not been elected yet, I have procured two tractors for the constituency. Now all farmers have to do is to fuel it and plough their farmlands.”

The occasion was also used to launch the Ketu South chapter of the pro-NPP group, Staunch Queens, to help mobilise vote for President Akufo-Addo and the NPP parliamentary candidate.

The Ketu South NPP Constituency Chairman, Samuel Petit Haligah, Volta Regional NPP Organizer, Emmanuel Bodja, and Mr Woanyah were presented with citations for their contribution to the development of the elephant fraternity in the region.

DISCLAIMER: The Views, Comments, Opinions, Contributions and Statements made by Readers and Contributors on this platform do not necessarily represent the views or policy of Multimedia Group Limited.
Tags:
Ketu South
Makafui Woanyah