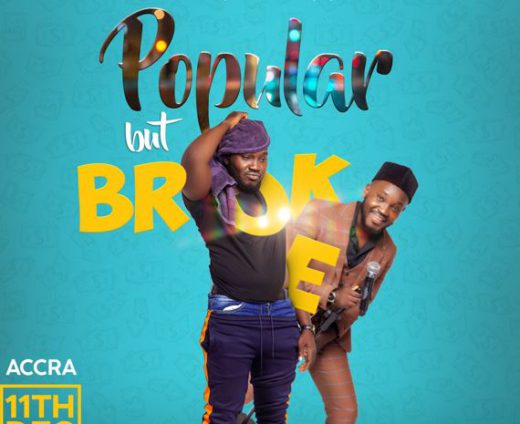 Comedy Prodigy OB Amponsah, in partnership with Joy Entertainment are set to treat audiences to a delightful December with an unforgettable comedy special.

The media partnership powers the highly anticipated ‘Popular but Broke’ comedy special – the revolutionary all-star standup comedy event, touted to move patrons off their seats, with its hilarious content and performances.

The special event is expected to live up to its description, as it historically marks the return of ace comedians Fritz Baffour and Mikki Osei Berko, both of whom proceeded on a stand-up comedy recess, spanning almost two decades.

Joy Entertainment will, with enthusiasm and professionalism, oversee all related publicity initiatives, targeted at making ‘Popular but Broke’ Comedy Special a huge success. This will be effectively executed via all its radio, TV and online platforms. Joy Entertainment exclusively owns coverage rights for the event.

This is Joy Entertainment’s premier association with a major comedy event, post-Covid-19, continuing a famed reputation for dedicated support to the Ghanaian Arts and Entertainment Industry.

The National Theatre will be home to history-making on December 11, as OB Amponsah, DKB, Mikki Osei Berko and Fritz Baffour share a common stage for the first time to treat patrons to a night of hilarious stand-up comedy.

Stay glued to all Joy Entertainment social media platforms for all updates.