Obasanjo, Babangida insult each other - MyJoyOnline.com

Obasanjo, Babangida insult each other 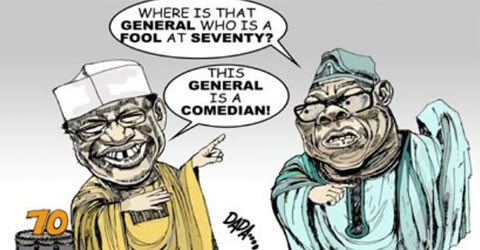 Former President Olusegun Obasanjo and former military President Ibrahim Babangida Thursday descended from the platform of statesmen into an acrimonious mutual war of words, accusing each other of foolery.

Thursday’s brickbat flowed from an earlier interview by Gen. Babangida on the eve of his 70th birthday on Tuesday where he said “in my eight years in office, I was able to manage poverty and achieved success while somebody for eight years managed affluence and achieved failure.”

Chief Obasanjo who was President for eight years retorted Thursday accusing Babangida of threading the path of foolishness at seventy even as he defended his administration against allegations of ineffectiveness couched in the earlier interview granted the press by Babangida.

He said that Babangida should rather be pitied and shown sympathy rather than anger or condemnation.

Babangida’s response was swift and severe as he tackled Obasanjo on both his performance record while in office and decency in his dealings even with his household and daughter in-law. He accused Obasanjo of being a witless comedian whose eight-year double term was characterized with human rights violations and mishaps including plane crashes.

Obasanjo who spoke with news men in Abeokuta during the visit of an American Team on an inspection of the Olusegun Obasanjo Presidential Library (OOPL) said that his initial thought was not to respond but that on second thought he decided to reply Babangida so that he (Babangida) would not consider himself wise.

“But if Babangida had decided on becoming a septuagenarian, that he will be a fool, I think one should probably do what the Bible says in Proverbs chapter 26, verse 4. It says, don’t answer a fool because you may also become like him.

“When you go to the same Proverbs chapter 26, verse 5, it says answer a fool so that he will not think he’s a wise man. So, I am now torn between which of the two verses I should follow in this respect. Some of the things he said unfortunately were not well thought-out.

“For instance, he talked about our energy. When I was the military head of state, I built Jebba dam; built Shiroro dam, I prepared the foundation of Egbin plant which President Shagari completed and commissioned. That time the money we were making was not up to the money Babangida made annually for his eight years and yet we built two dams. Because it was important, you know that power is the driving force for development and for any developing country. But since the building of Egbin power plant, until I came back in 1999 there was not any generating plant for almost 20 years and Babangida spent eight years out of that. Now, he has the audacity to talk about anybody; I think that is unfortunate.”

“Then as elected president, I built Papalanto, Omotosho, others and I started five of what they called Independent Power Stations which were stopped for two and a half years. Now the present administration has started building a new power project at Uyo. As a country, Nigeria should be adding nothing less than 1,500 megawatts annually. South Africa with a population of 50 million generates 50,000 mega watts. Nigeria with a population of about 165 million we are not generating, we as at 1999 met 1,500 mega watts before we took it up to 4,000 mega watts. What we started they are now allowing it to go on. I believe if they continue with the programme that we left, In another two years , we will get to 10,000”.

Obasanjo on sale of Nigeria Airways

Commenting on disclosures by erstwhile Director General of the Bureau of Public Enterprises, BPE, Mallam Nasir El-Rufai that he, Obasanjo stopped the sale of Nigeria Airways as President, Obasanjo said:

“One of the 32 was a wide-bodied aircraft, they had all gone and the report on which we worked is here, the amount of money we will have to pay if Nigeria Airways was sold, what we would get out of it is less than 10 percent of the debt we have to pay. That would be the debt Nigeria tax payers will have to pay; that will not be the way to run the affairs of this country. I won’t run my own affairs that way, so I opted for liquidation. So, it was bankrupt, it was liquidated; in which case whatever you gain from liquidation which is also a form of sale, it means the burden will be shared by all the creditors and everybody. So, if I owe you 10 dollars and what I sell when I am liquidated is two. That’s what you get. So, I did not allow normal privatization or sale because it would have put very heavy burden on Nigeria.

“So, Nigerians should know that and in fact my administration should be commended for that. It’s not that I did not allow the sale because the law establishing it says sale and liquidation is also a form of sale”.

Babangida in a riposte through a press statement issued by his spokesman, Prince Kassim Afegbua said:

“It is certainly not in the tradition of General IBB, such a refined gentleman officer; to join issues with his subordinates’ and superiors, but for the price we owe history, this riposte becomes appropriate and necessary. We expected Chief Obasanjo to react to the substance of General Babangida’s submissions and not deploy this distractive strategy to shy away from the real issues at stake. The statistics of the government they both ran at different times, speak for them.”

“The history of Chief Obasanjo is an open sore that is irredeemably contrived in several incongruities and contradictions. When he pleaded with IBB to be given another chance to extend his tenure, IBB was not a fool then. When he was released from prison and granted state pardon, bathed in cerebral ornaments and clothed in royal beads and later crowned as President of Nigeria, IBB was not a fool then. Now that he is at the extreme of his thoughts and engagements, he can decide to dress IBB in borrowed robes.

“But the histories of both of them, when put to public scrutiny comparatively, IBB is far glowing and instructively stands poles apart from Obasanjo. In terms of decency, finesse, class, distinction and general conduct, IBB could be described in the superlatives but for Obasanjo; God bless Nigeria.”

“For a man who cannot possibly tell his true age, one may excuse his present outburst as the effusions of a witless comedian trying effortlessly to impress his select audience.

“On the issue of performance, Obasanjo cannot contemplate a comparison of his conquistadorial and largely acquisitive regime that plundered our hard-earned state resources, with that of IBB government with verifiable record of achievements. Despite the fact that he carried out a clinical investigation of IBB’s regime, what did he establish against him? Nothing!

We wish to refer Obasanjo to the National Assembly to give his own side of the story to the several revelations that have become themes of his orchestra when he held sway as President of Nigeria. Perhaps, he would be able to tell the world how he managed Nigeria’s resources during his regime.

“Chief Obasanjo should ponder on these incontrovertible facts: The revenues that accrued to former President Obasanjo during his eight years are more than those that accrued to the nation from independence till 1999 before he took over.

“Despite such stupendous wealth of the nation, what was his performance profile? The number of high profile deaths by assassinations and politically motivated killings during Obasanjo’s eight years is more than any other in the history of this country.

“Besides, is it not curious that after Obasanjo’s exit, there has not been any reported case of plane crashes? What was his human rights record? The people of Odi in Bayelsa State and Zaki-Ibiam in Benue State are yet to recover from the massacre visited on them by Chief Obasanjo.

“Again Crude Oil sold for as much as $180 dollars per barrel for the better part of his eight years, what benefit did Nigerians derive from such excess crude? With the revelations coming from the hallowed chambers of the National Assembly, Nigerians are now coming to terms with the profligacy of the Obasanjo era.

“Against the backdrop of the above, it is ludicrous for him to raise any intellectual debate on the achievements of the governments they ran at different times in the life of the nation. Calling IBB “a fool at 70” is at best a compliment. Nigerians surely know who is truly a fool or the greatest fool of this century.”