Ohiamadwen: Where self-help is driving prosperity 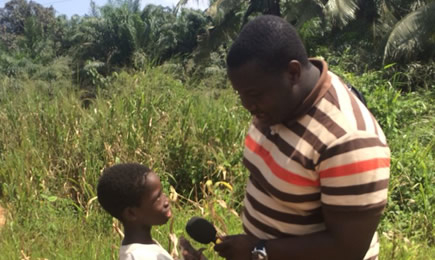 Often we hear stories of communities that have problems and are waiting for help from government.

But what if I told you there’s a village in the Western region which has taken its destiny in its own hands?

Ohiamadwen, a community in the Shama Ahanta East District is a town which has attained a feat many communities may never aspire to reach.

Their needs have driven them to provide education and better living conditions without relying on the state.

The name Ohiamadwen is a Fante word which literally means poverty pushes one to think. It’s a village led by a young chief Nana Afo Kwaku.

“I vision of Ohiamadwen is to be a community that people here can reach their potential,” Nana Afo Kwaku says. The inhabitants of Ohiamadwen believe everything is possible if they put their minds to it.

And yes they are living by this vision. The village through proceeds from its one hectare community rice farm has been able to set up a basic school.

But there’s more. It's efforts pushed the Shama assembly and GETFund to build a school complex on land the village provided. The community seeing this as a valid investment into their children’s future, has also started a seven room teachers quarters.

At the centre of the village, is the market square, a built mainly of sticks cut from the nearby forest. At the weekend, the market attracts hundreds of traders from other communities in the area.

The link roads around, although untarred, have been leveled-the kind you can easily drive your salon car on. Their main occupation, rice farming is boosted with a rice milling machine in the heart of the village.

The people also find time for recreation. The young men on a weekend gather under a tree to play draft with a lot of excitement. But the town has a football team.

I bumped into Tackie, the captain whose vision is to lead this team to the Premier league in five years.

“My vision is to take our team to the Premiere League in five years.”

But in spite of all the promises this village holds, a government project has driven some 120 farmers jobless for over four years.

The In Valley Rice Development Project which was to start in 2009 to shore up rice production is yet to start but the farmers have been deprived of their lands.

And for the children of some of these farmers, their education has been cut short after primary school.

One JHS graduate, Michael, said “I had a big dream to further my education to the very top but the story looks bleak now.”

Ohiamadwen is an example of a village which has taken hold of its destiny.

Members of the community have prioritized education and won’t sit and wait for government help.

But government’s one promise of more jobs and better living conditions still remains a dream six years on.