Oware Junior wins big at 2021 Stars in Worship event as he was honoured with a car - MyJoyOnline.com 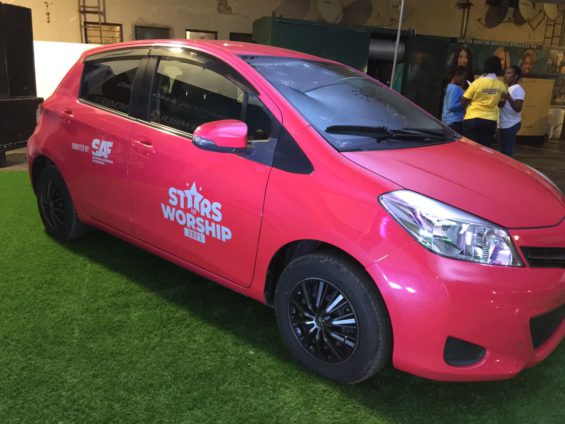 It was a historic night of mixed emotions for gospel musician, Oware Junior, at the 2021 Stars in Worship event held in Accra.

Broad smiles caked on the musician’s face when he was handed keys to a brand new Toyota Vitz at the House of Miracle Ministries on Saturday evening.

The singer was in seventh heaven after receiving the car for his outstanding contribution to the gospel music industry and his music’s impact on people over the ages.

The event gathered a gallery of music stars, including Daughters of Glorious Jesus, Uncle Ato, Jack Alolome, Chief Superintendent Kofi Sarpong, who were distinctly honoured for their meritorious contributions.

Oware Junior emerged as the ultimate winner and received an instant cash prize of GHC 25,000 from donors.

The excited musician recounted broke down in tears as he recounted the years he had to hire cars from people for programmes.

According to him, receiving the award was a dream come through and great fulfilment.

“No, no, I didn’t expect this, but I was praying for such a miracle, so I thank God for His grace. As people saw me on the stage, my testimony if I say it, we are not going to leave.”

“Repairing people’s cars, I’ve prayed into this for years, but the Lord makes things beautiful in His time. I don’t know if I can even sleep today because my dream, by the grace of God, has come through,” he said.

The musician is expected to release a new album in January 2022.

“My next album is coming out, and it is titled ‘Ɛnnyɛ Mea’, meaning ‘it’s not me’. I never even imagined this and the coming year; by the grace of God, I believe that Ghana will hear from me, and I believe the Spirit of the Lord is with us.”

It was a night of sterling music ministrations coupled with artistic spoken word and drama performances.

The event, which was organised by the Sampson Amoateng Foundation (SAF), saw the presence of Madina MP, Francis-Xavier Sosu, Deputy Lands Minister, George Mireku Duker, among others.

Stars in Worship is an annual program put together by Prophet Sampson Amoateng, the Founder and Leader of House of Miracles Worldwide, to help connect celebrities across Africa in worship.

The Masters of Ceremony (MCs) for this year’s event were Joy Entertainment’s KMJ and Adom TV’s Tima Kunkum.