Stars in Worship 2022: A night of pure worship and gifts 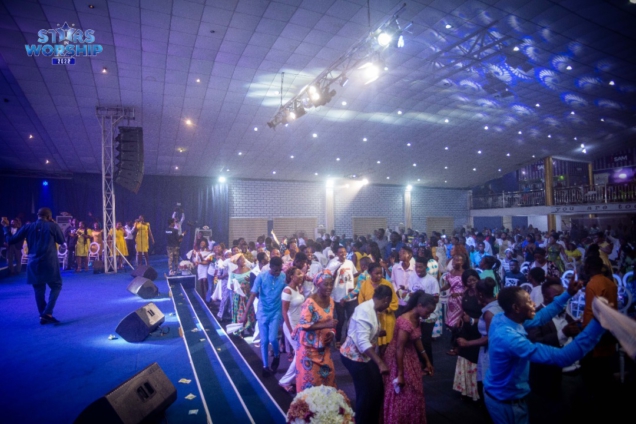 It was a thrilling night as the stars gathered to worship under one cloud at the House of Miracle Ministries auditorium in Accra.

Worshippers gathered to experience pure worship and praise at Stars in Worship concert 2022.

Prophet Sampson Amoateng, the Founder and Leader of House of Miracles Worldwide, said “Everybody carries a star and whatever happens to a person in life, depends on the star you carry.

“The issue is some stars are shining and others are not. The stars that shine are called celebrities. God gave me a revelation to bring the stars together, it doesn’t matter if they are secular or gospel musicians … those whose stars are not shining, as they worship together, their stars will also shine”.

Ministration after ministration, at the House of Miracles Ministries auditorium, was lifted with songs of praise, blazing through the skies to heavens, appreciating God for his goodness all year round.

For worshippers, the experience could be described as serene, glorious and impactful.

For Noble Nketsiah, it was a night to break or lose with praise.

“It’s been awesome, people still remember the songs I’ve released over the years and it is still a blessing for many people. This year I’ve released an EP which is the Christ and I’m looking forward to releasing a single in the coming year”, he said.

Every year, at Stars in Worship, Prophet Sampson Amoateng gifts someone with a car.

In 2021, veteran musician Oware Junior was honoured. This year, Pastor Kwesi Antwi Yeboah was the chosen one.

He received a new Nissan salon car for his dedication to the ministry. For him, it was a night of mixed with emotions.

“It was a shock to me because I came in as a member who comes to church regularly. Today I came to church, as usual, doing my duties and to my surprise, my name was mentioned; there is reward in service”, he said.

Stars in Worship is an annual program put together by Prophet Sampson Amoateng, the Founder and Leader of House of Miracles Worldwide, to help connect celebrities across Africa in worship.

The event was organised by the Sampson Amoateng Foundation (SAF), with support from Morgan’s Miracles, KIM Foundation Incorporated and Precious Souls Orphanage.

DISCLAIMER: The Views, Comments, Opinions, Contributions and Statements made by Readers and Contributors on this platform do not necessarily represent the views or policy of Multimedia Group Limited.
Tags:
House of Miracle Ministries
Stars in Worship