Partey to have scan on ankle injury suffered in Chelsea friendly 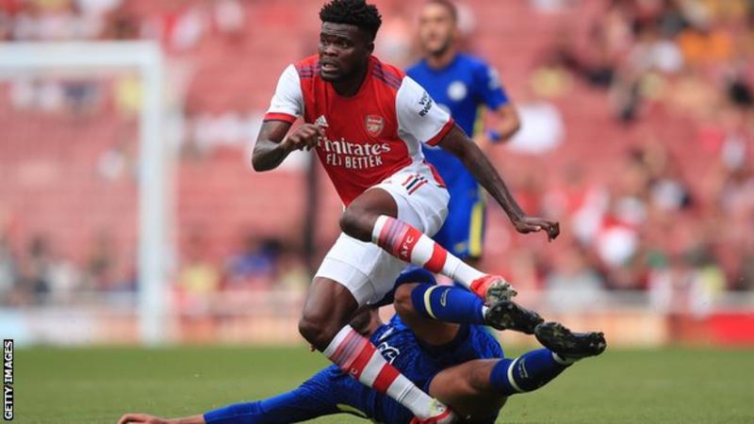 Arsenal midfielder Thomas Partey will need a scan on an ankle injury he sustained during Sunday’s 2-1 pre-season defeat by Chelsea.

Partey, 28, limped off during the first half following a tackle by Blues midfielder Ruben Loftus-Cheek.

“At the moment it’s not looking good because he was in pain and he could not continue which, for Thomas, is pretty unusual,” said manager Mikel Arteta.

Arsenal travel to Brentford in their Premier League opener on 13 August.

And Arteta has ruled out selling midfielder Granit Xhaka before the transfer window shuts at the end of this month.

The Switzerland international, who scored the equaliser against Chelsea in his first appearance of pre-season, has been heavily linked with a move to Roma.

“Granit is going to stay with us,” said Arteta. “He is a player who we rate and value so much. He’s a key member of our squad.

“He wanted to play today and I think it’s clear commitment from his side that he wants to be here.”

Tammy Abraham scored the winner for Chelsea at Emirates Stadium, pouncing on Hector Bellerin’s loose pass before firing home from just inside the area with 18 minutes left.

Arteta’s side thought they had levelled late on when Joe Willock’s shot hit the underside of the bar and appeared to bounce over the line, but goalline technology was not in use and the goal was not given.

Summer signings Ben White, Albert Sambi Lokonga and Nuno Tavares all came on as substitutes for their home debuts.

England international White, a £50m capture from Brighton, was quickly into the action, doing well to clear Hakim Ziyech’s effort off the line early in the second half.

More than 20,000 fans attended the game following the relaxation of UK government coronavirus restrictions, the biggest attendance at the ground since March 2020.