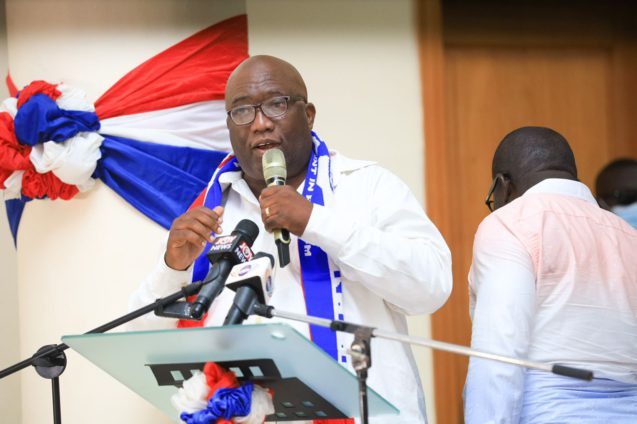 Joe Ghartey is the Esslkado-Ketan MP

The Essikado-Ketan MP, Joe Ghartey, has entreated his colleagues to seek review of the Supreme Court ruling that Deputy Speakers can vote while presiding if they disagree with it.

He said the controversies surrounding the judgement are needless since aggrieved parties can always opt for review at the Supreme Court.

The former Deputy Speaker and Minister of Justice indicated that there can be the possibility of a change in the ruling; hence, Members of Parliament who do not agree with the current ruling have the opportunity to seek redress.

“There are three institutions of government. Parliament is not the only one among them that is a master of its own rules. The Judiciary is as well.”

“This shouldn’t be an issue at all. If any of the parties disagree with the judgment, they can call for a review, and who knows, the Court may change its mind,” he said.

His comments come after the Supreme Court, presided over by Justice Jones Dotse, ruled on Wednesday, March 9 that a Deputy Speaker can be counted during the formation of a quorum for parliamentary decision-making and participate in voting while presiding over the parliamentary business.

Since that ruling, high-ranking members in the New Patriotic Party (NPP) and the National Democratic Congress (NDC) have expressed dissenting views over the matter.

The latest to join the debate is the Speaker of Parliament who has described as “absurd and reckless” the recent judgement of the Supreme Court.

Alban Babgin said considering that it was a 7-0 ruling by the judges’ path is worrying as the decision constitutes interference in Parliament’s work.

The Speaker who is on a medical holiday in Dubai said “the trend of unanimity is equally troubling. It doesn’t help explore and expand our legal jurisprudence.”

He has also described President Akufo-Addo’s comment on the ruling as myopic.

“The President’s comment is myopic and unfortunately it only goes to worsen the schism between the Executive and Parliament.

“The issue being discussed is the political question doctrine. It took centuries to detail out the strands of this doctrine, and the principles are settled as to when and how this closed book could be opened,” he stated.

What did Akufo-Addo say?

President Akufo-Addo in an interview on Thursday, March 10 said Parliament is not beyond the scrutiny of the Supreme Court.

According to President Akufo-Addo, “There is nobody in the Ghanaian State that is above the fundamental law of the land.

“It will lead to the very matter that we have striven so long to avoid – the concentration of unregulated power in our state – we don’t want that. And we brought about this Constitution to allow that to not reoccur.”

But former President John Mahama disagrees. He has criticised the Supreme Court over its ruling.

In a post on Thursday, the NDC 2020 flagbearer said “if Deputy Speakers, because they are Members of Parliament, can vote while presiding as Speaker, they could as well be able to participate in any debate on the floor over which they are presiding. This is the absurdity into which the Supreme Court ruling leads us.”

Mr Mahama’s reaction adds to his earlier concerns where he stated that the Supreme Court’s unanimous sets a dangerous precedent for the country’s Parliamentary procedure.

He described the verdict by the Court as “shocking but not surprising.”

According to him, the Wednesday ruling was “an unfortunate interpretation for convenience that sets a dangerous precedent of judicial interference in Parliamentary procedure for the future.”